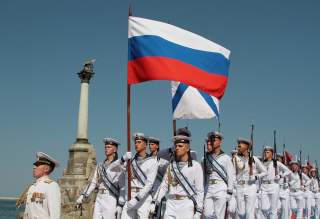 Over the past year, the Russian Navy has undertaken several high visibility operations, most notably the deployment of the aircraft carrier Admiral Kuznetsov off the coast of Syria, and the launch of cruise missiles from ships based in the Caspian Sea. Russian submarine activity has also increased, although not quite to the level seen in the Cold War.

But Moscow might be best advised to heed Matthew 26:41 where maritime adventures are concerned; “Watch and pray, that ye enter not into temptation: the spirit indeed is willing, but the flesh is weak.” The Russian Navy is a mess, and it will probably become more of a mess in the future.

The Russian Navy inherited a massive, modern fleet of surface ships and submarines. Most of these disappeared in short order, as Russia was incapable of maintaining such a flotilla. The remaining major units of the Russian Navy are very old, and in questionable states of repair. Of the twenty-four major surface combatants operated by the Russian Navy, three (the frigates of the Admiral Grigorovich class) were laid down after the end of the Cold War. Most of the holdouts from the Soviet Navy are approaching the end of their useful lifespans, although the Russians have made some effort at refitting and updating parts of the fleet.

How long the Russians can keep the aircraft carrier Admiral Kuznetsov in a kind of service without a major refit is up for serious question, but despite ambitious promises no replacement has been laid down. The nuclear battlecruiser Pyotr Velikiy has remained active for the past decade, and reports persist that Admiral Nakhimov will return to service in the next couple of years, but both ships are in excess of thirty years old.

If Moscow built every ship that they had promised to build over the past decade, then the Russian Navy would indeed become a world class fleet. The Russian national security state thrives on the announcement of big projects, but not so much on their fulfillment. The actual record of Russian surface ship construction is, by international standards, rather grim.

The biggest successes of Russian shipbuilding have been the Admiral Grigorovich (4,000 tons) and the Admiral Gorshkov (5,400 tons) frigates. The former have endured construction times of roughly seven years; the latter of nine or so years. Two Grigorovich frigates have entered service, with four more under construction. The first Gorshkov should enter service sometime later this year, with three more on the way.

By contrast, it took the British about six years to construct the Type 45 destroyers; the Americans about four for an Arleigh Burke; the Japanese four years for an Atago; and the Chinese about four for a Type 052D. All of these ships are roughly twice the size of the frigates Russia is struggling to complete.

The twelve ships of the Lider class, a proposed 17,000 ton destroyer, could easily replace the existing cruisers and destroyers of the fleet, but there is little indication that the Kremlin plans to lay these ships down, much less complete them in a reasonable timeframe. Russia’s recent economic crisis has made naval construction an ever harder sell. Moreover, the seizure of Crimea cut off the possibility of foreign acquisition (primarily the Mistral class amphibious assault ships), although at some point Russia could perhaps consider buying ships from China.

The strength of Russia’s position depends, to great extent, on an evaluation of the centrality of nuclear submarines to naval power. Nuclear submarines, in both their ballistic missile and attack variants, are really the only things that the Russian shipbuilding industry has done well since the end of the Cold War. While the size of the flotilla has dropped (thirteen SSBNs, seven SSGNs, seventeen SSNs and about twenty diesels, depending on what’s available that day), the Russian Navy has worked hard to ensure that replacements are on the way. The eight submarines of the Borei class (three in service, five under construction) should serve as a capable deterrent for the foreseeable future, and the seven Yasen class nuclear attack submarines provide a modern complement to Russia’s existing stock of Sierra, Oscar and Akula class subs.

The Russian Navy had an interesting twentieth century. In 1905 Russia was a credible second-tier naval power, with sizable, modern fleets in the Baltic, the Pacific and the Black Sea. The destruction of the former two fleets at the hands of the Japanese caused a crisis, but in thirteen years after the Battle of Tsushima, Russia would put seven dreadnoughts into service despite the disruption of World War I. This placed Russia in firmly the same company as France or Italy, although well behind Britain, Germany, Japan and the United States.

The Bolshevik Revolution, not unlike the collapse of the Soviet Union, simultaneously forced a consolidation of existing forces and a renunciation of planned new construction. Like the Russian Federation, the Soviet Union futzed through the first twenty years of its existence without a clear idea of what it wanted from its navy, before embarking (on the eve of World War II) on a massive construction program. The war disrupted these plans, but also provided clarity; Russia’s strength and security lay in its army, rather than in its navy. Nevertheless, the Soviet Navy steadily increased in strength across the Cold War, at some point clearly passing the French and British fleets and becoming the world’s second most powerful navy.

And then everything fell apart, again. The Russian Navy could not maintain the fleet it inherited, much less afford the pace of new construction necessary to keep its military shipbuilding industry healthy. A death spiral ensued, as the cost of maintaining older ships increased, along with the build time for new vessels, while the quality of maintenance and construction declined. The financial crisis of the last few years, brought about by a combination of sanctions and cratering oil prices, helped snuff out signs of life in everything other than submarine construction.

International comparisons don’t do Russia any favors. China will have at least three aircraft carriers by the time Russia commissions its second; India will have at least two, as will the United Kingdom. In terms of regular surface combatants, the situation looks rather worse. As noted above, France, Britain, Japan and China have all commissioned major, large surface warships in the last decade, all of which cleanly outclass Russia’s legacy ships in terms of technological sophistication. The comparison with China is particularly stark; while Russia has commissioned five major surface combatants since 2000 (three of which were laid down during the Soviet period), China has commissioned about forty. These numbers will get worse over the next few years.

As Dmitry Gorenburg has argued, Moscow’s naval ambitions appear painfully unrealistic. Until Russia reestablishes its shipbuilding industry, it cannot compete with China, Japan or South Korea. Until Russia restructures its economy, it cannot reestablish its shipbuilding industry. Notwithstanding outsized investments in defense, Russia can plausibly expect to compete on only a very narrow set of capabilities; nuclear attack submarines, nuclear ballistic missile submarines, and mid-sized frigates and corvettes. On the upside, Russian industry has done a creditable job of installing new missile technology onto existing platforms.

Finally, it bears mention that the modern Russian Federation lives with the same maritime handicaps as its predecessors, the Soviet Union and the Russian Empire. The Russian Navy is divided between four different fleets, (Black Sea, Baltic, Northern and Pacific) none of which can easily support the others. Getting the Admiral Kuznetsov to the Mediterranean and back without a serious breakdown was considered a major accomplishment. Contrast this with China, which maintains three regional fleets within easy sailing distance of one another.

Long story short, Russia’s navy is in bad shape, and Russia is in no shape to rebuild it. In the foreseeable future, Russia should commit to naval projects that it absolutely requires, and that it does well. This mostly means a nuclear submarine flotilla capable of posing a deterrent threat, and a small surface fleet tasked with managing routine maritime maintenance operations. Anything more is probably too much of a reach.

Robert Farley, a frequent contributor to TNI, is author of The Battleship Book. This first appeared in 2017.