Is Russia Preparing For An Invasion of This Important Piece of the Arctic? 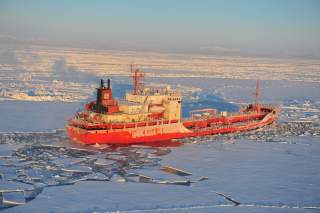 Move then Greenland, Donald President Trump should know that the real Arctic prize is Svalbard (formerly known as Spitsbergen). At least that’s what renewed murmurs of Russia seeking to invade the Svalbard archipelago highlight. And these rumors die hard. A Russian-annexed Svalbard is a peripheral fear, which is anchored by historical precedent. The Nazi’s occupied Spitsbergen during World War Two, illustrating the strategic significance of the archipelago for U.S.-Europe replenishments. Whilst a Russian invasion of Svalbard is certainly “on brand” for Putin’s Russia, and indeed makes tactical sense, we should not expect the archipelago to turn red.

During the large-scale annual Russian military exercise, Zapad-2017, the dubious Norwegian website Aldrimer fanned the distorted the message that the Northern Fleet and airborne assault units simulated amphibious coastal landings—specifically tailored to Svalbard. This sparked a bit of controversy both in Oslo and Moscow. Shortly after, the issue was lost in our twenty-four-hour news cycle environment.

That was until this year’s iteration of the Tsentr-2019 drills, which involved a Far North element. As such, the Northern Fleet rehearsed a coastal assault operation on the Severnaya Zemlya archipelago. Of course, geographic realities are such that this archipelago is rather similar to the operational environment of its neighboring Svalbard archipelago.

Evidently, the age-old Western-debate on “whether or not Russia might intend to undertake a Svalbard land grab” is still alive and kicking. So, is Russia training to Arctic-specific coastal assault operations? Yes. All Arctic-rim powers are, it is their duty. Does this mean Moscow intends to capture the archipelago? Yes, no and maybe. Here, the answer is nuanced and rather complicated for a number of reasons.

First, Russia’s interest in developing and bolstering its amphibious coastal assault capability is not geared solely for the Arctic region. It is the case that since 2015, when Moscow’s military training returned to the Arctic, the Russian armed forces have had a consistent training focus upon amphibious coastal assault operations with both artillery support and fighter aircraft strikes. Yet, this is not Arctic-specific but applies to other theaters of operation. What happens in the Arctic is not always about the Arctic. There is an emerging Pacific strategic theatre which the Russian military is preparing to take an active amphibious role in.

Second, let’s look at essential military tactics. Should a war take place in the European Arctic, Russia carrying out an amphibious operation on Svalbard would actually make sense. The archipelago would likely be a hallmark of Russian strategy.  Holding Svalbard would offer the Kremlin strategic depth and safety for submarine operations towards the North Atlantic. Indeed, placing military assets on the southernmost island Bjørnøya (Bear Island) would also give the Northern Fleet access right down to the Barents Sea. Here, Svalbard is actually a crucial component of Russian A2/AD strategy in the North Atlantic. Of course, this is nothing new, and Soviet Bastion strategy illustrates similar planning during the Cold War.

Russian fortification of the Svalbard archipelago would likely feature the following. A surface detachment of light-displacement vessels supporting the Northern Fleet’s landing ships and crafts, with organic support from the Arctic Brigade and Airborne troops (VDV). This could be potentially upgraded to a larger combined-arms operation with air support from Russia’s air force (VKS) and air defense standoff assets. However, a Russian operation would have to take place in an ice-free environment, as the Northern Fleet only fields one icebreaker, the Ilya Muromets. Perhaps, climate change will slowly make the idea of a fleet of Navy icebreakers moot.

Once “little white men” land on Svalbard, air and naval capabilities could potentially interdict access to the Norwegian and Barents Seas and hamper reinforcement efforts to NATO, Norway and to their Swedish and Finnish partners. Russia will have plausible deniability to boot. For these “little white men” just happened to be visiting their relatives living in the Russian mining Svalbard settlement at Barentsburg. It is, of course, harder to deny the Russian grey zone operations around the archipelago, including simulating air wing attacks in the High North or jamming GPS links in Finnmark.

Of course, a hypothetical Russian annexation of Svalbard would test the coherence of the Svalbard Treaty (of which nations far removed from the Arctic-like Australia are party to) and of NATO’s Article 5 collective defense assurances. A Svalbard Treaty with no teeth might further shape the future history of a similar “peaceful zone”—the Antarctic.

Already we can see the fractures in the international legal architecture governing Svalbard. The Kremlin is displeased with Norway’s interpretation of the status of the Svalbard archipelago, particularly when it comes to Oslo’s touted jurisdiction over the exclusive economic zone and its management of the Svalbard Fisheries Protection Zone.

Historical lessons of Soviet Cold War military planning might be helpful looking ahead to the region’s future. We now know the nature of Russian A2/AD planning, and its application to the Arctic region. The Kremlin will continue to seek defense in depth towards the Barents Sea and the North Atlantic. The priority to remove any tension in the Arctic Zone of the Russian Federation (AZRF) will remain constant, as will the survivability of the sea-based nuclear deterrent located on the Kola Peninsula.

Therefore, should conflict emerge in the European Arctic, we can expect the Kremlin will secure the AZRF by rapidly establishing an out-of-area sea denial perimeter towards the North Atlantic sea lines of communication. Now, whether Svalbard is included in these calculations is another story. While we can’t know for sure, geographically speaking, we should expect Svalbard to fall under Moscow’s control in a time of Arctic conflict. But is this the same outcome in a conflict-free Arctic?

For now, during Arctic peacetime, the Kremlin is not looking to annex Svalbard. The Russian Federation will Chair both the Arctic Council and the Arctic Coast Guard Forum (ACGF) between 2021 and 2023. Moscow has already hinted it would seek to continue the cooperative agendas of the recent Finnish and now Icelandic Council Presidencies. Indeed, regional cooperation is desirable to ensure Russian Arctic LNG exports continue—conflict is bad for business. There might actually be a window of opportunity for Russia to address military security affairs in the European Arctic, but due to the Arctic Council mandate, this dialogue will need to take place in a new regional security mechanism.

Let’s face it, not even the Russians seek to battle in the Arctic if they can avoid it. Not only does the environment considerably hamper the ability of troops to survive, move and fight, but military hardware needs to be able to operate in the harsh, cold, dark environment. Furthermore, we know the Arctic local fauna is dangerous, even the most inconspicuous species.

Overall, Svalbard is an ambiguous piece in the Arctic geostrategic puzzle. Russia is a legitimate Arctic power, with emerging ambitions to shape the region’s strategic trajectory. For this reason, we should not expect the Svalbard rumors to ever subside. After all, it is a particularly attractive piece of strategic real estate. And Russia knows it.

Dr. Elizabeth Buchanan is a Research Fellow at the Centre for European Studies at The Australian National University and a Non-Resident Fellow at the Modern War Institute, WestPoint.

Mathieu Boulegue is a Research Fellow at the Russia and Eurasia Programme at Chatham House – The Royal Institute of International Affairs.