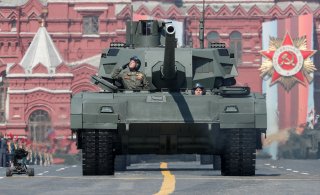 Russia’s military is on the verge of accepting deliveries of its highly anticipated T-14 Armata tank. “The [tank’s] state trials will come to a close next year. It will actively go into serial production from next year,” Russia’s Industry and Trade Minister Denis Manturov told the state news outlet TASS.

First unveiled at the 2015 Victory Day Parade in Moscow, the T-14 Armata is a fourth-generation main battle tank (MBT) that brings a wide array of cutting-edge design features to Russia’s ground forces. As noted by Jane’s Defence Weekly, Russia’s defense industry has been less than consistent in its messaging on the Armata tank’s production and development progress. Moscow previously planned to procure as many as 2,300 Armata tanks by 2020, a wildly optimistic estimate that was later pushed back to 2021 and then again to 2025. Manturov reportedly said on Russian state television in April 2020 that serial T-14 Armata deliveries would begin in 2021, seemingly contradicting his most recent statement to TASS. Manturov’s latest timetable appears to align with Russia’s Defense Minister Sergei Shoigu’s announcement in March that Russia’s armed forces will take deliveries of a “pilot batch” of T-14 tank’s in 2022, confirming that the tank has been delayed by another year.

The T-14 MBT weighs forty-eight tons and is capable of reaching speeds of up to ninety kilometers per hour. The T-14 tank features an unmanned turret scheme with an isolated crew capsule, boasting a twenty-five-millimeter 2A82-1M smoothbore gun with autoloader compatibility. Rostec CEO Sergey Chemezov noted that the tank’s artificial-intelligence-powered weapons systems can handle the entire acquisition, tracking, and targeting process without any considerable degree of manual input. “The Armata crew does not need to aim accurately,” he said. “It only has to aim the gun roughly. Electronics will do all the rest: it will accurately determine the distance to the target and aim the gun at it. That is, the vehicle uses artificial intelligence elements that help the crew deliver fire.” Nevertheless, Chemezov added that only a human operator can make the final decision on whether or not to take the computer-calibrated shot. The tank also features the latest iteration of Russia’s advanced Malachit explosive-reactive armor and the Afghanit active protection system, the newest onboard digitized equipment, and reported quality-of-life features that include an on-board lavatory. The T-14 tank is based on Russia’s modular next-generation Armata Universal Combat Platform, which also includes the T-15 heavy infantry fighting vehicle and T-16 armored recovery vehicle

The T-14 tank looks to be more than capable of giving NATO’s current MBTs a run for their money, but the tank has been unable to shake the cost concerns that have plagued the program since its inception. The Armata’s projected per-model cost of roughly $3.7 compares favorably against other fourth-generation platforms, particularly South Korea’s K2 Black Panther, but is still a major strain on Russia’s relatively modest defense budget. The Kremlin is eager to offset the tank’s long-term costs with a series of early export contracts, with Manturov telling TASS—without providing additional details about any possible ongoing negotiations—that several foreign states have expressed interest.

All the technical foundations for a cutting-edge MBT platform appear to be in place, but it remains to be seen if Moscow is able to reign in the T-14 tank’s costs as the tank enters serial production in coming years.