Russia Is Ready to Rumble With NATO 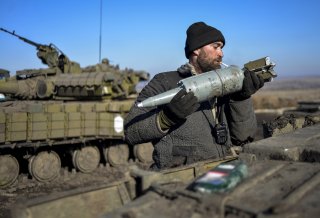 Here’s What You Need to Remember: Russian military maneuvers along the Ukrainian border have caused many to recall the 2014 invasion of Crimea, which U.S. military leaders regularly refer to as a “wake-up call” regarding the kind of threat Russia continues to present to America and the North Atlantic Treaty Organization (NATO). Several key areas of concern cited by Western observers and senior U.S. military leaders included the Russian use of drones and electronic warfare. While these threats remain very much on the radar, some of the observations of the 2014 invasion have been somewhat overshadowed by the advent of newer Russian weapons. These include the Su-57 stealth fighter, hypersonic missiles and low-yield nuclear weapons.

While the sheer size of Soviet forces during the Cold War was massive, the combination of size with advanced weaponry and new technology makes for what might be called an even more ominous threat.

During the 1980s, Russia operated thousands of armored vehicles and had access to as many as four million troops, a scenario that presented a decades-long massive threat of a Russian-led invasion into Western Europe. The threat of a Soviet invasion on the European continent inspired large-scale U.S. deployments to Germany, upticks in nuclear weapons production and a series of now-famous American innovations including the Abrams tank, Apache attack helicopter, B-2 bomber and F-15 fighter jets.

Today, Russia’s land forces may be numerically slightly smaller than they were during the Cold War era, yet the technological sophistication of its weapons platforms such as the Su-57 fighter, T-14 Armata tank and S-400 air defenses, not to mention hypersonic missiles and tactical nuclear weapons, present an entirely new and serious threat to the U.S. and NATO.

The Russian military has roughly one million active-duty military personnel and as many as two million reserve forces, according to globalfirepower.com. During the Cold War, the Russian Army had as many as three to four million members, yet Moscow’s current forces are a serious concern today.

The Russian military is listed as having more than 4,000 aircraft and 1,500 helicopters. On the ground, Globalfirepower.com says Russia has 13,000 tanks, 27,000 armored fighting vehicles and nearly 6,000 self-propelled guns for artillery. While the Russian military may not have a conventional force the sheer size of its Cold War force, they have made efforts to both modernize and maintain portions of their mechanized weaponry and platforms. The Russian T-72 tank, for example, has been upgraded numerous times since its initial construction in the 1970s.

Finally, regarding sea power, Globalfirepower.com assesses the Russian Navy as having 600 ships, including one aircraft carrier, 15 destroyers and 63 submarines. The Black Sea is a strategically significant area for Russia in terms of economic and geopolitical considerations as it helps ensure Moscow has access to the Mediterranean.

Kris Osborn is the defense editor for the National Interest. Osborn previously served at the Pentagon as a Highly Qualified Expert with the Office of the Assistant Secretary of the Army—Acquisition, Logistics & Technology. Osborn has also worked as an anchor and on-air military specialist at national TV networks. He has appeared as a guest military expert on Fox News, MSNBC, The Military Channel, and The History Channel. He also has a Masters Degree in Comparative Literature from Columbia University. This article was first published in early 2021.