Russia Says It Can Shoot Down Hypersonic Missiles 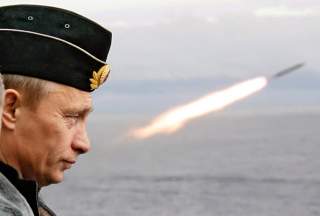 In fact, Russia is ahead of both the United States and China in offensive hypersonic missiles and defense against those missiles, asserts Russian news agency TASS. Russian media has previously claimed that the S-500 is virtually a wonder weapon that can shoot down stealth aircraft, ballistic missiles and orbital satellites.

Russia has aggressively pursued offensive hypersonic development, such as the Kinzal air-launched ballistic missile and the Zircon anti-ship missile. The United States and other Western nations fear that weapons with hypersonic speed—or faster than Mach 5—may be too fast for anti-missile defenses to shoot down.

Viktor Murakhovsky, editor-in-chief of the defense journal Arsenal of the Fatherland, spoke to TASS after Russian president Vladimir Putin demanded that Russia develop anti-hypersonic capabilities before other countries do.

"Some elements of this [hypersonic] defense are already in service: we have already deployed air defense systems of the Moscow Industrial Region and put them on combat alert,” Murakhovsky said. “As for the S-500 system, it has been stated this year that its trials are at the final stage. Now the experimental design work on these weapons has to be completed and subsequently, possibly, next year, this work will be completed, the systems will undergo state trials and enter into service.”

He also pointed to the Nudol anti-ballistic missile system under development, and modernization of the Cold War 53T6 ABM system and the S-350 Vityaz air defense missile as having “no analogues in the world as the promising capabilities against hypersonic weapons.”

"As for the Nudol mobile system, no specific timeframe for completing its development has been given,” Murakhovsky said. “This is also a weapon that can operate against hypersonic targets, such as the warheads of intercontinental ballistic missiles.”

Unlike the Cold War interceptors, which are fixed weapons, the Nudol is mobile. “The country’s entire territory cannot be protected from one position only and that is why the Nudol mobile system being developed can move and deploy in positioning districts in the areas, from which a threat may come,” Murakhovsky said.

Murakhovsky estimated that America and China will need several years to create offensive hypersonic weapons. “Several projects in this area are underway in the United States at present,” he told TASS. “They are trying to combine these projects into one program but I believe that at least 5-7 years will pass before the US Army can get something real.”

“China is developing hypersonic guided weapons quite actively but the country lacks the scientific and technical potential, which Russia possessed when it was developing such weapons.”

But what is not clear is why the S-500 is supposed to be such an effective defense against hypersonic weapons. Indeed, the S-500 is something of a question mark. Russia’s Sputnik News claimed last year that the system had remarkable capabilities. In addition to a range of 155 miles, “the 30-foot-long two-stage solid fuel missile travels at nine times the speed of sound and is able to intercept targets moving at a speed of Mach 15.6.”

The missile supposedly can hit targets above 300,000 feet, which would give the weapon potential to hit orbital satellites. And it supposedly can intercept multiple ballistic missile warheads descending through the atmosphere at Mach 20. “The S-500 is expected to able to detect and simultaneously attack up to ten ballistic missile warheads flying at speeds of over 4 miles a second,” said Sputnik News.  Its one-of-a-kind self-homing warheads search for their targets and, finding them, switch to an automatic-homing mode.”

But until the system is deployed, and tested in combat, its real capabilities will remain unknown.