Russia Says Its Spy Drones Can Fly Over Canada (And the United States?) 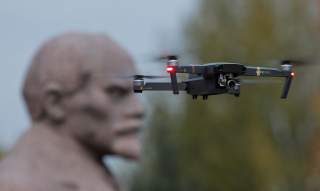 Russia says that it is developing reconnaissance drones that can fly over Canada.

“Russia is finishing the development of unmanned aerial vehicles (UAVs) capable of reaching any point in continental Europe if they start from the Kaliningrad region, or Canada if they fly from Chukotka,” said Russia’s Sputnik News Agency.

Kaliningrad—the former German city of Konigsberg—is a Russian enclave on the Baltic sandwiched between Poland and Lithuania. Chukotka is the northeast tip of Siberia, across the fifty-five-mile-wide Bering Strait from Alaska. The distance between Paris and Kaliningrad is about a thousand miles. Whitehorse, the capital of the Canadian Yukon, is about 1,600 miles from Chukotka, while Vancouver, British Columbia is about 2,500 miles away.

An article in the official military newspaper Krasnaya Zvezda, which lauded Defense Minister Sergei Shoigu’s accomplishments since he took office in 2012, extolled Russian progress in unmanned aircraft. “Almost four dozen military units and subunits have been formed, for which over 1,800 modern unmanned aerial vehicles have been supplied. This makes it possible to conduct reconnaissance to a depth of up to 500 kilometers [311 miles], and also to effectively use them in the interests of electronic warfare, communications, fire destruction as part of reconnaissance-shock and reconnaissance-firing circuits. The capabilities of the unmanned aerial reconnaissance group increased by 15 times.”

The article also stated that “characteristics of domestic UAVs are continuously being improved. In particular, the development of promising systems capable of performing tasks to a depth of 3,000 kilometers [1,864 miles] is being completed.”

What’s interesting isn’t just the assertion that Russian drones could overfly North America, specifically Canada. Canada and the United States are co-members of North American Air Defense Command (NORAD), to which unauthorized overflights of Canadian airspace will be of some interest.

The interesting part is that Russian media did not mention overflying the United States, though Alaska borders Chukotka. While a Russian drone could fly over the Arctic Ocean to reach Canada without overflying U.S. territory, it seems quite possible that a drone launched from northeastern Siberia to spy on Canada would enter U.S. airspace at some point.

And, of course, a drone that can reach Canada can certainly reach Alaska. And a spy drone can also be transformed into an armed drone, either with missiles or with electronic jamming gear to disrupt communications.

In itself, Russia’s self-touted achievement isn’t as impressive as it sounds. A U.S. MQ-9 Reaper attack drone has about a thousand-mile range, while the airliner-sized RQ-4 Global Hawk can travel 14,000 miles.

But Russia seems to be sending a message; Canada—and the United States—are vulnerable to Moscow’s drones.