Russia Seems to Have Lost the Ultimate Doomsday Weapon: A Nuclear-Powered Cruise Missile 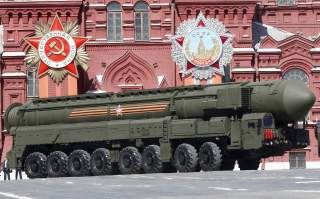 In the worst reboot of The Hunt For Red October we’ve ever heard, Russia has lost a secretive nuclear-powered cruise missile at sea during a failed test in the last several months, CNBC reports.

- Citing an unnamed U.S. intelligence official, CNBC reports that that Russian military lost one of the four cruise missiles used during tests conducted over the Barents Sea between last November and February, all of which ended in failure.

- The status of the missile and its nuclear fuel is unknown, and its disappearance has reportedly triggered an all-out search in the Barents Sea north of Scandinavia by Russian military personnel. According to CNBC, the four test flights ranged from five miles to twenty-two miles.

- While it’s currently unclear which launch resulted in the lost missile, U.S. Air Force nuclear-sniffing WC-135 ‘Constant Phoenix’ aircraft were active in the Barents Sea and Baltic Sea from March to August of this year, with a Russian fighter intercepting one of the aircraft over the Baltic Sea on August 8.

- This missile, one of many doomsday devices touted by Russian President Vladimir Putin’s government during Moscow’s last showcase of new military capabilities, is purportedly capable of loitering as an unmanned second-strike platform that can remain in the air for an extended period of time over a virtually unlimited range.

Obviously, the cruise missile could cause an environmental catastrophe if the reactor is breached. But besides the stupidity of losing a bunch of nuclear material in the middle of the open ocean, the incident reveals the short-sighted nature of nuclear-powered cruise missiles at all: they cause environmental devastation, they’re horribly expensive, and decommissioning them is a virtual nightmare. It makes little sense for Russia to even test the damn things since the Ministry of Defense has such an effective nuclear deterrent in place already.

Frankly, a nuclear-powered cruise missile is a 1950s dream that goes against all logic in a world with hundreds of ICBMs tipped with multiple independently-targetable reentry vehicles, all of which can kill a city.

YF-23: The Stealth Super Plane the U.S. Air Force Almost Built Instead of the F-22