For Russia, Trump's Stance On NATO Could Be The Gift That Keeps On Giving 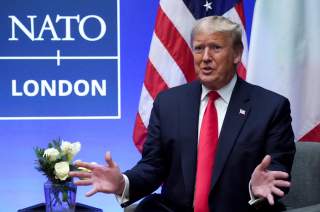 Key point: In some ways NATO can substitute its own resources, but in others, it simply needs America.

What would happen if the United States left NATO?

The International Institute of Strategic Studies examined several scenarios in which NATO (including Canada) had to confront Russia without U.S. support.

In one scenario set in 2021, Russia occupies Lithuania as well as Polish territory bordering Kaliningrad. With Lithuania and Poland as NATO members, NATO invokes Article 5, which treats an attack on one member as an attack on all members. It prepares a military force—minus U.S. troops and support—to compel Russia to withdraw from the occupied territories.

Currently, NATO has a division-sized NATO Response Force, and there are plans to add enough battalions to create a corps-sized force. However, “neither of these structures would therefore prove sufficient to generate the force size required in this scenario,” the study concludes.

For example, to meet Russian forces well-endowed with tanks, NATO’s intervention force would need to be mostly composed of heavy brigades with modern tanks and infantry fighting vehicles. And to achieve a 2:1 force ratio sufficient to defeat the Russians, four corps would be needed.

Yet in the Baltic invasion scenario, without U.S. troops and assuming the Polish army has already suffered heavy losses, “the remaining European members of NATO and Canada currently only have around 20 brigades that would meet these criteria,” the International Institute for Strategic Studies (IISS) estimated.

About one-third of this total comprises formations primarily equipped with lighter, wheeled, armored vehicles. Assuming that, on average, 50 percent of these formations would be able to deploy within the 90 days given, the overall force available to NATO would be equivalent only to a single corps. In a similar vein, there are currently insufficient numbers of modern artillery, particularly long-range systems. A significant increase in the size of both capabilities would therefore be necessary to adequately address the requirement, through some combination of greater overall force pools, improving the equipment level of existing European heavy brigades, and a substantial increase in readiness levels.

That land force would need cover against Russian air attacks, while Moscow’s huge arsenal of ballistic and cruise missiles are pounding NATO air and supply bases. “The limited amount of available longer-range air and missile defense would be just sufficient to cover the necessary front-line air bases for NATO, but there would be no excess to protect the land component itself or to protect critical military infrastructure sites such as rear-area headquarters and logistics,” the study warned.

NATO navies would also have difficulty operating in the confined and missile-rich Baltic, Black and Mediterranean seas. NATO lacks sufficient drones and reconnaissance systems, while many NATO nations only have enough ammunition for a few days of combat, especially in smart bombs (which NATO ran out of during limited air strikes on Libya in 2011).

To make matters worse, the cost of procuring sufficient equipment and personnel to defeat a Russian invasion of the Baltics could be as high as $357 billion. But beyond the financial cost of European NATO (which includes Canada in the IISS study), there remains the question of how indispensable the United States is to NATO.

In some ways NATO can substitute its own resources, but in others, it simply needs America. “Some of the capabilities provided by US forces, such as logistics and sustainment for land forces, may be relatively straightforward if not cheap to replace,” the study concluded. “However, others are almost unique to the US, and it would be difficult to substitute European capabilities.”