Russia Is Trying to Make Its Very Own Glock Firearms 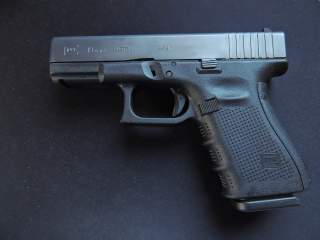 The Glock is one of the world’s most common pistols. Its popularity spawned a bevy of competitors that shared many of the same design features: striker fired-action, polymer frame and no manual safeties.

Most of these “Glock-alikes” have been made in the West, pistols such as H&K’s VP9, S&W’s M&P and Walther’s P99/PPS. But the Glock had admirers in Russia as well. Russia produced its own series of “Glock-alikes” in the 1990s, some of which serve on to this day.

One of the areas in which the Glock shines is in the concealed carry role. The polymer frame and no manual safeties make the gun light to carry and rapid to deploy. The need for a concealable pistol resulted in Russia’s first Glock-alike, the P-96.

Designed by Vasily Gryazev at the KBP Tula design bureau, The P-96 was designed from the ground up to be a concealed carry pistol. The entire gun is smoothed to prevent any snags on the draw. The overall layout is similar to a Glock, with some minor differences.

The frame is fully polymer, with two small metal rails on which the slide rides. The trigger has a small nub which acts as a safety, and the striker is contained within the metal slide.

Unlike the Glock, the striker protrudes from the rear of the slide when cocked to notify the shooter the gun is ready to use. This is similar to the VP9 and P99. The magazine is also a double-feed double-stack, drawing from Soviet experiences with the APS pistol.

The gun also utilizes a rotating barrel locking mechanism in contrast to the Glock’s tilting barrel. This has been known to reduce felt recoil and increase accuracy, and nowadays even Glock has implemented it in the Glock 46, albeit almost twenty years after the P-96.

Overall, the P-96 was kind of a flop. The gun had some quirks like not being able to rack the slide without the trigger being depressed, which made it impossible to unload a live round.

However, the design evolved into the GSh-18, Russia’s most successful Glock-alike.

The GSh-18 was meant to be a full on service pistol, not just a concealed carry piece, so KBP Tula teamed up Gryazev with Arkady Shipunov. The pair of designers was already well known for the GSh-series of aircraft cannons.

From the outset, the Glock 17 was considered as the baseline on which the design should be based. The Russian government tacked on some additional requirements: the pistol must be able to fire the 7N21 AP and 7N31 “super AP” 9x19mm rounds.

The less popular features of the P-96 were ditched, cycling the slide doesn’t require the trigger to be depressed on the GSh-18.

Design for the GSh-18 was finalized by 2000, and the gun successfully passed all state trials. It was adopted by a myriad of security services that needed a more modern pistol.

Despite this success, the design is still considered to be inferior to the original Glock due to some “bugs” in its operation, such as difficulty cycling the slide and a weird recoil impulse.

While not really a “Glock-alike” in the truest sense, the influence of the Glock design can also be seen in the SR-1 “Gyurza” special purpose pistol.

Designed to fire the even-more-armor-piercing 9x21mm round, the SR-1 utilizes a trigger safety (though now paired with a grip safety) in a plastic frame to allow for rapid deployment and light weight. However, it’s a hammer-fired gun, unlike the Glock, P-96 and GSh-18.

Despite their non-success compared to western Glock-alikes, the Russian Glock-alikes are interesting pistols that incorporated some cool design elements that Glock themselves would later use.