Russia vs. Britain: In 1988, a Royal Navy Frigate Played Pranks on Soviet Ships 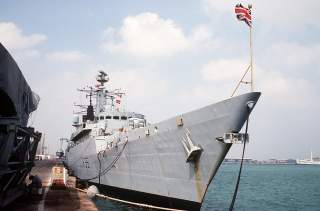 In the late 1980s, tensions between NATO and the Soviet Union began to ease. American president Ronald Reagan and Soviet premier Mikhail Gorbachev in 1987 signed the Intermediate-Range Nuclear Forces treaty, or INF, which banned in Europe land-based, nuclear-tipped cruise missiles and rockets with ranges between 300 and 3,400 miles.

As a gesture toward the thaw, the Royal Navy made more visible some of its most strategic intelligence-gathering missions. Instead of sending hard-to-detect, nuclear-powered attack submarines into Soviet waters, the U.K. fleet instead sent highly-visible surface warships.

Among them was the new Type 22 frigate HMS London. In command of the 490-feet-long, missile-armed frigate was a former submarine commander, Capt. Doug Littlejohns. He brought to his frigate command all the daring and roguishness that was typical of sub-commanders. Littlejohns’ exploits are the subject of several chapters in naval historian Iain Ballantyne’s new book Undersea Warriors.

Littlejohns took command of London in December 1987 as her second captain. The frigate boasted the latest hardware for electronic intelligence-gathering.

“The American-origin Outboard Electronic Intelligence system was extremely capable,” Ballantyne wrote. “Combined with other sensors and communications equipment, it all fed into a computer in the operations room, where it was stitched together to form one combat picture. The Computer-Assisted Command System could simultaneously track up to 500 contacts.”

The Royal Navy declared London to be fully operational in January 1988. She deployed to the Baltic Sea, “a backwater,” according to Ballantyne. “Even so, for a captain with the aggression and daring of Littlejohns it was a challenge to be embraced.”

“The main purpose was to test [London] against real potential targets,” Littlejohns said. “At that time the Russians considered the Baltic to be their own private lake and we set out to prove them wrong.”

In the dead of night London made the passage between Denmark and Sweden. “For further cover, London’s lights were arranged to impersonate a merchant vessel and by dawn she was off the coast of the USSR,” Ballantyne wrote.

The main objective, Littlejohns said, was “hanging around sucking in useful intelligence on our sensors, making sure they all operated to specification.”

The Soviets realized a NATO warship was off their coast. They sent aircraft and helicopters to buzz London. Meanwhile, a Matka-class, missile-armed hydrofoil sailed to intercept the frigate.

“Littlejohns decided to have some ‘fun and games’ with the Matka,” Ballantyne wrote.

The hydrofoil “was fitted with high-speed diesel engines, so if we went fast then he was okay, but if we went slowly he would coke them up after an hour or so,” Littlejohns recalled. “He would then have to do a high-speed run to burn off the coke.”

Littlejohns doubled down on the harassment of the poor hydrofoil crew. The former sub captain dressed up as a priest, had his ship’s workshop produce a coffin then organized a mock funeral on the deck in full view of the Soviets. The frigate’s crew slid the coffin into the sea.

“It was deliberately designed to float,” Ballantyne wrote. London sailed away from the bobbing coffin. Littlejohns grabbed a pair of binoculars and watched as the Soviets scooped up what they apparently hoped would be an intelligence prize.

But instead of containing the body of a U.K. sailor, the coffin yielded surprises for the Soviets. “A bottle of whiskey, pornographic magazines and copy of Littlejohns’ favorite novel, The Hunt for Red October. There also was a note from Littlejohns that read, “Haven’t you go anything better to do?”

The coffin full of treats actually warmed the Soviets to the NATO interlopers. “I’m sure [the hydrofoil captain] enjoyed our decadent capitalistic gifts,” Littlejohns quipped. “He was certainly less unfriendly thereafter, stopped playing silly rules-of-the-road games and waved cheerily when he made close passes. He even spoke to us a couple of times on the VHF [radio].”

Littlejohns wasn’t done. For his final prank on the hydrofoil, Littlejohns held a shipwide contest to see which group of sailors could produce the most outrageous fake weapon system.

“The winners turned out to be a bunch of ratings who used various dustbins and their lids to create a convincing ‘monster torpedo,’” Ballantyne wrote.

“It had the biggest fin ever seen on a NATO naval weapon. Mounted amidships, next to the real torpedoes, this striking thing attracted lots of attention from the shadowing Soviet vessels. They would swing in past the ship, zoom lenses of their spy camera zeroing in on the new, so-called super-weapon.”