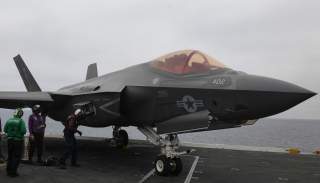 The interesting part isn’t this news, so much as the commentary by Izvestia, which suggests where Moscow is headed (or where Moscow wants everyone to think it’s headed).

Russia is developing a new vertical-takeoff aircraft—and new carriers to launch them.

An article in the Russian newspaper Izvestia (see translation here) featured statements by two Russian officials that suggested vertical takeoff and landing, or VTOL, aircraft carriers and aircraft will be joining the Russian Navy.

Denis Manturov, the head of the Russian Ministry for Trade and Industry, said Russia would not build helicopter carriers. “I should only note that the shipbuilding program envisages construction of universal landing craft whose landing facilities (helicopter wing, landing craft, and floating armor) are supposed to be placed inside the ship hull or on the ship deck,” he said.

Then Yuri Barisov, deputy prime minister for defense, said Russia had been developing a VTOL aircraft since 2017, which would be deployed in the next seven to ten years.

The interesting part isn’t this news, so much as the commentary by Izvestia, which suggests where Moscow is headed (or where Moscow wants everyone to think it’s headed). The article argues that pure helicopter carriers are a Cold War relic, replaced by assault helicopter carriers whose choppers are there to land troops, and “universal landing craft” that can launch VTOL aircraft. Russia built two Moskva-class helicopter carriers in the 1960s, and then Kiev-class carriers flying vertical short takeoff and landing (VSTOL) aircraft. The Admiral Kuznetsov has been the only Russian carrier able to launch and recover regular fixed-wing aircraft as the U.S. Navy does.

But the two French Mistral-class amphibious assault ships were embargoed after Russia’s seizure of Crimea in 2014. The Izvestia article seems to be suggesting that Russia will build its own equivalent.

But a VTOL carrier needs a VTOL aircraft. The Soviet Union fielded the unimpressive Yak-38, and partly developed but never completed the Yak-141 in the1980s. The Yak-141 is too old to resurrect, so a new model is needed. “Creation of the VTOL system, if now in progress and initiated in 2017, may lead to a flight of the first experimental prototype in 2022-2023 and the launch of the machine in series production in the late 2020s,” Izvestia says.