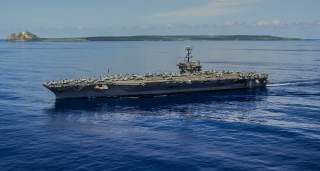 Russia has started preliminary work on the development of a nuclear-powered aircraft carrier to replace the increasingly decrepit Soviet-era Admiral Kuznetsov, which recently entered into a two-year overhaul. However, the Kremlin has not made the decision to actually buy a new flattop.

Russia has started work on the potential future carrier’s nuclear propulsion system in anticipation of the day that the Kremlin does make a decision on building such a warship. "Today, an engine has been launched [the research work on its creation has been launched] and today we are working precisely on this issue,” Russian Navy shipbuilding chief Rear Adm. Vladimir Tryapichnikov told the state-operated Star TV channel according to TASS. “Some concept will be approved in the near future. Of course, this is expensive but such a ship should be built."

But while Tryapichnikov might believe that Russia should build a new aircraft carrier, he concedes that the decision to go ahead with the construction of such a vessel is a decision for the future. "Such a decision will be made in the near future," Tryapichnikov said.

According to TASS, the Russian Navy wants a nuclear-powered aircraft carrier displacing no less than 70,000 tons by the late 2030s. However, Russia’s chances of designing and building a carrier by then are extremely small. Soviet-era carriers were built at Nikolaev in what is now an independent Ukraine, though Russia is slowly assembling the shipbuilding capacity in the Russian Far East to handle the construction of vessels of that size.

“When we build new shipyards and a huge dry dock in the Far East, if there is such a contract, it will be possible to create an aircraft carrier having a displacement of 110,000-115,000 tonnes,” Russian deputy prime minister Dmitry Rogozin said on the Rossiya-24 new channel last year according to TASS. “We will be capable of doing that starting from 2020."

The Russians are building a 114-meter—374 feet—wide dry dock at the Zvezda shipyard in the Russian Far East that might one day build such a large aircraft carrier. Rogozin noted that while the shipyard would be physically capable of building an aircraft carrier, the question if Moscow needs such a large warship would be up to the Russian military’s general staff. "We now have no restrictions regarding the tonnage of civil or naval ships we may choose to build there," Rogozin said.

Analysts in Russia told The National Interest that while it is true that Moscow is building a massive new shipyard in the Far East, the project is not a military development. Rather the project is a commercial venture with significant foreign investment from South Korea, which could complicate any attempt to build a military vessel at those shipyards.

Moreover, simply possessing the physical infrastructure to build an aircraft carrier does not mean that Moscow has the technical knowledge to build an 115,000-ton warship. Russia has never built a warship of such size and complexity before in its entire history.

The only comparable vessels constructed during the Soviet-era were the much smaller roughly 55,000-ton Kuznetsov-class carriers. Even Ulyanovsk, a nuclear-powered carrier that was scrapped after 20 percent of construction was completed in 1992, was expected to displace no more than 85,000-tons. Thus, Moscow would have to relearn many of the techniques needed to build such a vessel.

In any case, Russia is a Eurasian landpower—Moscow does not really have a need for a very large and very expensive aircraft carrier. A more likely scenario is that the Kremlin will invest in a large-deck amphibious assault ship that can be used to project power in Moscow’s immediate periphery.