Russia Wants To Use AI-Sea Mines To Sink America's Navy 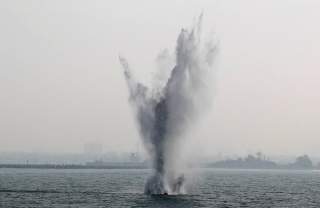 Key point: The idea is to create “complexes” of AI-controlled mines that are self-learning, and can adapt their behavior.

Russia is combining the old with the new to create a potentially powerful naval weapon.

On the old side are mines, which date back to the American Revolution, and the venerable Be-12, the 1960s Soviet military seaplane which is still flown today. On the new side is Artificial Intelligence that will enable smart naval mines to identify ships and submarines.

The idea is to create “complexes” of AI-controlled mines that are self-learning, and can adapt their behavior. “The complex of self-taught minefields is a completely new Russian development,” claims Izvestia. “It includes robotic mines and a special command control unit. After minor refinement, practically all classes of warships and submarines, as well as naval, tactical and strategic aviation, will be able to act as carriers of mines.”

“After the mines are thrown, the mines will automatically ‘line up in battle formation.’ In standby mode, they respond to certain characteristics of the magnetic and acoustic fields of ships and submarines. For this, the mine is equipped with special sensors and sensors, and its hardware has a special self-learning algorithm. With it, mines will be able to determine the type of ship and distinguish their ships from strangers. To identify targets, acoustic portraits of their ships and ships of a potential enemy are laid in the software. These peculiar ‘passports’ make it possible to identify with high probability which ship or submarine is in the affected area. As a result, your ship will move through the minefield in complete safety, and the enemy will be destroyed.”

What’s interesting here isn’t just the idea of smart mines, which the U.S. Navy is just beginning to embrace. It is also that Russia appears to be developing a universal naval mine that can be dropped by a wide variety of ships, aircraft and submarines.

Also notable is that the former chief of the General Staff of the Navy admitted that the current Russian Navy has problems with mine warfare.

If that’s true, then Russia is lucky, because the U.S. Navy’s capability to sweep mines has almost disintegrated. A ProPublica investigation found numerous problems with the Navy’s aging fleet of eleven Avenger-class minesweepers were sidelined for maintenance so often that crews were left with inadequate training time. Even worse, the Navy’s battlefleet would be deprived of essential minesweeping capabilities in areas like the Persian Gulf, where Iran would certainly deploy numerous mines in the narrow waterway.

“The Avenger-class ships were built in the late 1980s and early ‘90s and slated for retirement years ago,” ProPublica noted. “But their retirement date has been continually delayed because the service still doesn’t have a working replacement. The Navy’s latest estimate is that the ships will all be decommissioned by fiscal year 2023.”

As is often the case with the U.S. and Western militaries, a high-tech solution is supposed to solve the problem. The U.S. Navy is developing a robot minesweeper. Britain has already developed them, as has Israel. In addition, multiple navies are turning to underwater drones, such as the U.S. Navy’s Knifefish, to detect mines.

Nonetheless, if Russia is expanding it minelaying capability and making the mines themselves smarter with AI, then inevitably this technology will spread to other nations such as Iran. Minesweepers may not be as sexy as aircraft carriers, but America needs one as much as the other.