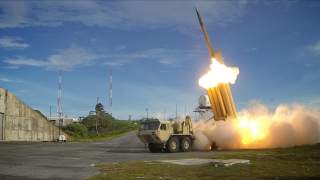 The U.S. Army in April 2019 announced it would deploy to Romania one of its seven Terminal High-Altitude Area-Defense missile-interceptor batteries. The planned summer 2019 deployment coincides with a shut-down of the U.S. Aegis Ashore missile-defense site, also in Romania, for a scheduled upgrade.

THAAD, which in theory possesses some of the same capabilities that Aegis Ashore does, could help to fill the gap left by the Aegis system’s temporary suspension.

But THAAD also could antagonize the Russian government, just like Aegis Ashore has done.

“At the request of NATO, the Secretary of Defense will deploy a U.S. Army Terminal High Altitude Area Defense system to Romania this summer in support of NATO ballistic-missile defense,” U.S. European Command announced.

“The THAAD, from the 69th Air Defense Artillery Brigade, 32nd Army Air and Missile Defense Command stationed at Fort Hood, Texas, will integrate into the existing NATO BMD architecture during a limited period of scheduled maintenance and updates on the Aegis Ashore Missile Defense System in Romania this summer.”

As of early 2019, the Army had acquired around 200 THAAD rockets for its seven batteries and roughly 40 launchers. The U.S. Missile Defense Agency on its website describes THAAD as a “land-based element capable of shooting down a ballistic missile both inside and just outside the atmosphere.”

According to the agency, THAAD has “completed 15 successful intercepts in 15 attempts since program initiation. The two most recent tests were conducted in July 2017.”

The Army mans THAAD batteries on the island of Guam as well as in South Korea. The Army in March 2019 deployed a THAAD battery to Israel. The United Arab Emirates also operates THAAD.

“While deployed, THAAD will support the ongoing Aegis Ashore Romania mission at Naval Support Facility Deveselu as part of the existing U.S. and NATO BMD mission. Once in place, NATO’s Allied Air Command will assume operational control of THAAD for the duration of its mission.”

U.S. missile defenses for decades have been controversial in Russia. Moscow views American BMD systems as a threat to the global balance of power, as they, in theory, could render ineffective Russia’s own nuclear-tipped rockets. In fact, most U.S. missile-defenses lack the speed, range and accuracy to intercept an intercontinental ballistic missile.

However, the United States’s Ground-Based Midcourse Defense systems in Alaska and California, both of which exist to intercept North Korean rockets, in controlled tests have proved to be capable of hitting some ICBM-class weapons.

Many Russians also believe, wrongly, that Aegis Ashore has a ground-to-ground capability and could function as a surprise first-strike weapon.

NATO is eager to stress that both Aegis Ashore and THAAD pose no danger to Russia. “NATO’s Aegis Ashore ballistic-missile defense site in Romania will undergo a long-planned update this summer,” the alliance stated after the United States announced the THAAD deployment.

“This update, which has been taking place across the Aegis ballistic-missile defense system fleet, will not provide any offensive capability to the Aegis Ashore missile-defense system,” NATO added.

The THAAD unit will be under NATO operational control and the full political control of the North Atlantic Council. It will only remain operational until the Aegis Ashore Romania site is back online. The update and deployment are expected to last several weeks.

In accordance with NATO's ballistic-missile defense system, the THAAD unit will be focused on potential threats from outside the Euro-Atlantic area. Aegis Ashore Romania is purely a defensive system.