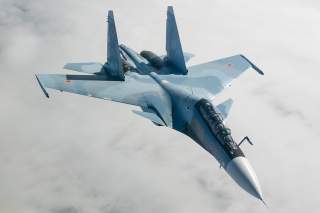 The three-and-a-half minute clip is strikingly well-edited, comparing favorably with official Russian material; it arguably even gives western counterparts a run for their money in production value. Whereas comparable videos tend to focus on the raw technical prowess of the weapon in question, this clip is particularly effective at highlighting the relationship between pilot and plane.

The Su-30SM is presented as a natural extension of its pilot; flying a Su-30SM is as much a personal experience as it is a military job, as much a realization of one’s own potential as it is a service to one’s country. The music choice of an obscure “Personal Jesus” cover may seem odd at first glance, but serves to reinforce the almost spiritual tone maintained throughout the video.

In evoking this powerful sense of exhilaration-- if not liberation-- from flying a supermaneuverable fighter at supersonic speeds, the clip taps into the core emotions motivating jet fighter enthusiasts not just in Russia but across the world. Russia’s Defense Department would be wise to note that, as a recruitment tool to entice Russians into joining the VKS, one such video carries more weight than any number of grainy 60-second clips depicting yet another uninspired landing or aerial refueling run.

Among all of Russia’s military branches, it was perhaps the air force that suffered the greatest blow to its effectiveness and prestige in the aftermath of the Soviet collapse. As the Kremlin continues to invest in a sweeping overhaul of the aging, bloated Soviet air force, technical modernization is not enough. The Russian military establishment has to make VKS enlistment a desirable career track; an unenviable task, to be sure, but one made considerably easier with an understanding of what drives the target demographic of young Russian men.

The Su-30SM is a deep modernization of the Su-30, itself a heavy, thrust-vectoring, long-range, and multirole advanced variant of the Su-27. As with most of Russia’s later Su-27 variants, the Su-30SM was designed to accommodate a more robust air-to-ground arsenal without sacrificing the handling and maneuverability that made the Su-27 the backbone of the Soviet interceptor and air superiority roster. Though not exactly a household name in western defense coverage, the Su-30SM enjoys widespread brand recognition in Russia as the current fighter of the Russian Knights aerobatic team. As previously covered by The National Interest, the Russian Knights are known for their high-risk, high-reward routines and tragic team history.

The Su-30SM’s blend of cost-effectiveness and role versatility make it a popular export choice across the former Soviet bloc, with recent customers including such staple Russian defense partners as Armenia, Belarus, and Kazakhstan. Contrary to prior speculation, the Su-30SM is here to stay for the foreseeable future. Instead of being replaced outright by the superior Su-35, the VKS plans to turn the Su-30SM into a kind of “Su-35 light,” boasting the upgraded AL-41F-1S engine and modern radar of the latter.