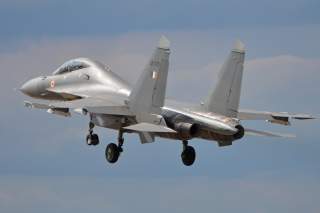 The Russian military wants to improve the Su-30 fighter to the Su-30SM standard in the hope of selling upgrades to India.

The Su-30 could benefit from many of the systems that manufacturer Sukhoi developed for the newer Su-35.

"After completing the work on the Su-30SM upgrade, changing the layout of the onboard radio-electronic equipment to make the Su-35 and the Su-30SM more standardized and thus cut the cost price and standardizing the airborne weapon systems, this may breathe a new life into the plane," Russian deputy prime minister Yuri Borisov told reporters on Feb. 26, 2019, according to state media.

The Su-30, a derivative of the 1970s-vintage Su-27, first flew in 1989. Where the Su-27 is a single-seat air-superiority fighter, the two-seat Su-30 is a multi-role fighter that can carry air-to-air and air-to-ground weaponry. The Su-30 is distinctive for its forward-mounted canard winglets.

Sukhoi has built more than 600 Su-30s. They're in service in Russia and around the world. India possesses one of the largest Su-30 fleets. "Considering that there are about 200 [Su-30s] in India, an opportunity will probably open for modernizing this fleet to prolong its service life," Borisov explained.

The Indian air force is spending billions of dollars to modernize and expand its fighter fleet.

New Delhi has a short-term requirement for 115 new fighters. Candidate types include a new version of the F-16 that Lockheed calls the "F-21" plus Boeing's F/A-18E/F, the Rafale, the European Typhoon, the Swedish Gripen E and the Russian MiG-35 and Su-35. Indian companies would assemble the new jets on license.

A brief but violent air war over disputed Kashmir in February 2019 could compel India to double down on its modernization efforts. On Feb. 26, Indian planes crossed the line of control at India's border with Pakistan and bombed what New Dehli described as a terrorist training camp near Balakot.

Indian media reported that as many as a dozen Mirage 2000s took part in the mission alongside one of India's EMB-145 airborne early-warning aircraft, an Il-78 aerial tanker and at least one Israeli-made Heron drone. On Feb. 27, 2019, Pakistani F-16s crossed the line of control to attack Indian forces, New Delhi claimed.

Indian MiG-21s intercepted the F-16s and shot down one of them, killing its pilot, according to the Indian government. Islamabad claimed its forces shot down two MiG-21s, but New Delhi copped to losing just one jet. Imagery of the Pakistani F-16's wreckage has played across Indian media, perhaps complicating Lockheed's efforts to sell India the F-21.

Russia's own defense spending is declining amid a wider economic slump. Sukhoi and other companies should look to foreign markets to make up for slipping domestic spending, Borisov said. "It is necessary to move towards diversification and towards gaining foothold on the civil market."

As part of the Su-30SM upgrade, older fighters would get the same AL-41F-1S thrust-vectoring engines that propel the Su-35 as well as the type’s more-powerful radar. “The upgrade will boost the fighter’s combat capabilities: it will increase the range of detecting and identifying air targets and furnish the plane with new precision weapons to hit air, ground and sea targets at a range of several hundred kilometers,” Russian state media reported.

State media claimed the modernized Su-30SM would conduct flight trials before the end of 2019. India could select a new fighter around the same time. If it picks the Su-35 and also opts to modernize its Su-30s, a pair of similar Sukhois could become New Delhi's most important warplanes.