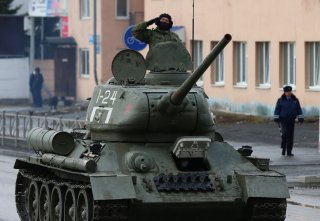 The Russian Defence Ministry has ordered some 15,000 soldiers back to base, where they will be put under a two-week quarantine in an effort to stop the spread of the new coronavirus. Even as recently as last week the Russian Army was still rehearsing for the Victory Day parade to be held on May 9 in Red Square to mark the 75th anniversary of the end of the Second World War in Europe – known in Russia as "The Great Patriotic War."

Only late last week did Vladimir Putin finally announce the decision to postpone the celebrations, which were to include parades in approximately 450 cities all over Russia and also to include the participation of 116,000 military personnel, or about 10% of the Russian Armed Forces' peacetime strength. The holiday has remained significant in Russia as it honors the victims and veterans who took part in the conflict.

The "risks associated with the epidemic, whose peak has not passed yet, are extremely high," said Putin as reported by The Moscow Times. "This does not give me the right to begin preparations for the parade and other mass events now."

The Kremlin had been hesitant to postpone this year's event, as it was meant to strengthen ties with foreign leaders, such as French President Emmanuel Macron, who was expected to attend. President Donald Trump had also been invited but declined due to concerns from his top advisors. However, National Security Adviser Robert O'Brien had planned to lead the American delegation at this year's parade.

The concern now is whether the preparations could have resulted in unnecessary exposure to COVID-19. A leaked video appeared online this month that showed thousands of troops lined up in tight formation at a parade ground outside of Moscow. The Russian Defence Ministry has confirmed that it held a parade rehearsal on April 1 with as many as 15,000 soldiers in attendance.

Russia had been criticized for allowing the rehearsals for the parade to continue during the COVID-19 outbreak as soldiers were unable to practice social distancing despite Moscow and the surrounding region instituting strict physical distancing guidelines. It isn't clear if any of the soldiers who took part in the Victory Day preparations had been infected, but cases of coronavirus have been discovered in several Russian military units and academies. Earlier this month the defense ministry also confirmed that dozens of cadets and instructors from the Nakhimov Naval Academy in St. Petersburg, which sent a delegation to march in the parade rehearsals, had been infected with the coronavirus.

With the postponement of the celebrations, the additional full dress rehearsals for the parade that had been scheduled for April 29 and May 4 have been canceled.

The Russian Army had also been in the spotlight for its efforts to help fight the spread of coronavirus across Europe. Last month Russian military transport planes brought medical specialists to an airbase outside of Rome to help Italy's efforts and this followed by missions in early April to Serbia. It is unclear if any of the personnel who took part in those missions may have been exposed to COVID-19.