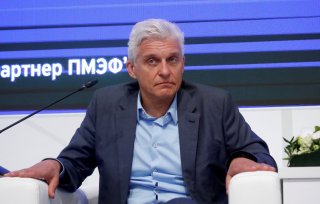 Banking tycoon Oleg Tinkov has renounced his Russian citizenship in protest of Moscow’s invasion of Ukraine.

“I have taken the decision to exit my Russian citizenship,” Tinkov wrote on Instagram. “I can’t and won’t be associated with a fascist country that started a war with their peaceful neighbor and killing innocent people daily,” he said. “I hope more prominent Russian businessmen will follow me, so it weakens Putin’s regime and his economy… I hate Putin’s Russia, but love all Russians, who are clearly against this crazy war!” Tinkov added. Tinkov’s Instagram post, which has since been deleted, contained a document suggesting he formally renounced his citizenship on October 26. Tinkov wrote in a subsequent Instagram entry on Tuesday that his original post “has mysteriously disappeared,” adding that it must have been the work of “Kremlin trolls.”

Tinkov, who founded Tinkoff Bank in 2006, has been a vocal critic of the Russian war effort in Ukraine. “Of course there are morons who draw Z but 10 percent of any country are morons,” he previously said, referring to the widespread usage of the letter Z as a symbol of public support for the Russian invasion. According to CNN, despite his opposition to the Kremlin’s decision to launch the war, Tinkov was among sixty-five individuals and entities sanctioned by the British government in March for “supporting” the Russian invasion. Tinkov pleaded guilty to tax fraud in the United States last year in a scheme Justice Department officials said involved him renouncing his U.S. citizenship while misrepresenting his net worth.

Tinkov sold his 35 percent stake in Tinkoff’s parent company, TCS Group, to Russian billionaire Vladimir Potanin earlier this year. Tinkov added that he is in consultations with lawyers to revoke all Tinkoff branding from the bank. "My name should not be associated with fascism," Tinkov said. "I hate when my brand/name is associated with the bank that collaborates with killers and blood." A Tinkoff Bank representative told Russian news outlet RIA Novosti that the bank owns all legal rights to Tinkoff branding. However, Tinkoff announced earlier this year that it decided to change its branding. “The company has been preparing for this step for a long time, and recent events have made this decision more urgent,” Tinkoff said on Telegram, adding that the company has “long outgrown” the original meaning of a “named brand.”