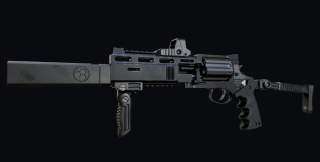 Russia’s 12.7x55mm caliber is one of the strangest calibers in active use. A thick but short case, the caliber is optimized for throwing heavy bullets at low velocities, which has made it useful for a variety of special purposes.

The first and original role the 12.7x55mm was designed for was being a more “beefy” version of the 9x39mm suppressed armor-piercing cartridge. The 6S8 VSK/VSSK rifle is chambered in 12.7x55mm and is designed to defeat targets in heavier body armor that cannot be reliably penetrated by the smaller 9x39mm cartridge. This is an implicit acknowledgment that the 9x39mm cartridge, while designed to defeat Cold War body armor, may not cut it against modern ceramic plate armor. But the VSK has not seen much field usage despite being “adopted” by the FSB, which seems to prefer traditional designated marksman rifles such as the SVD or the German H&K MR308 from photos from the field.

However, Russian industry soon found another role for the round as an extreme “stopping” power round for close combat. The RSh-12, a large frame, bottom barrel revolver was the first gun released in the caliber. However in the “stopping power” role, the round was revised to use far smaller bullets than in the sniper role, making the ammunition non-interchangeable despite using the same casing. This can be seen in this photo, which has the short “assault” 12.7x55mm cartridges in the left column and the longer “sniper” 12.7x55mm cartridges in the center column.

But as the VKS, the RSh-12 does not seem to have had much success in use. A blog has speculated that the revolver stopped being shown at trade shows due to adoption by Russian law enforcement and security agencies, but there are practically no photos of it being in use, and the development of the Russian PL-15 and the adoption of the Austrian Glock 17 suggest that operator preference is for faster, more rapid shooting guns in intermediate calibers rather than larger “hand cannons.”

The most recent development is the ShAK-12, otherwise known as the ASh-12.7. Small Arms Defense Journal speculated that the use of 12.7x55mm in this role stemmed from the 9x39’s success as a “stopping power” cartridge. A bullpup carbine chambered in the shorter “assault” 12.7x55mm round, the ASh-12.7 makes a lot more sense than the revolver, as the invariably heavy recoil of the round is more easily controlled in a carbine or rifle format than in a handgun. The design of the ASh-12 is derived from the VKS, as evidenced by the shape of the receiver and stock, but the rifle features many improvements and differences, many of which stem from it being selective fire and meant for the assault role. The resulting firearm also has some very interesting ergonomic features for a Russian firearm, diverging from traditional Russian or Soviet designs.

First of all, the ASh-12.7 features a thumb safety separate from the firemode selection. The safety is placed in an ergonomic position where it can be easily actuated from a firing grip, but the fire selection is placed in the rear of the rifle near the magazine well. The British L85 rifle places its fire selector in a similar position to make switching the firemode a slow deliberate action by the operator, but the decision to place it there has been criticized by many of its users. The ASh-12.7 also features a spring loaded dust cover similar to those found on Armalite rifles, something rarely seen on Russian or Soviet firearms.

Despite its advanced features and unique capability, the ASh-12.7 also seems to be having a lukewarm reception by Russian special units, and seems to have remained an “arms show” gun, with more photos of people in suits holding it than people in combat dress. Perhaps it will see more use as modern body armor proliferates more to insurgent groups in Russia. But for the time being, AK rifles remain the primary long arms in use by Russian assault teams.