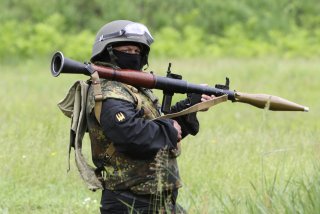 Earlier in the week, a court in Rostov-on-Don, a Russian city located near the Ukrainian border, heard the case of a Russian criminal who had been convicted for bribery while working for a catering company. That man, identified as V.N. Zabaluyev in court documents, claimed that in his role as the company’s deputy regional manager for military meal logistics, he had been responsible for supplying meals to Russian troops in eastern Ukraine.

In his remarks, Zabaluyev, who was sentenced to five years in prison in 2019, claimed that a caravan of seventy trucks carried thirteen hundred tons of food and other supplies into Ukraine’s contested Donbass region every two weeks to supply Russian troops.

Summarizing the case, judge Leonard Sholokhov claimed that the corruption case centered on food supplies intended for “the garrisons of the Armed Forces of the Russian Federation stationed on the territory of the Donetsk and Luhansk People’s Republics,” two pro-Russian secessionist groups in Donbass.

Zabaluyev’s testimony, and Sholokhov’s summation, raised eyebrows on Russian and international media, as Russia has publicly denied sending its troops into eastern Ukraine.

The offending document was promptly taken down, and the court’s press office later released a statement claiming that the summation had simply repeated Zabaluyev’s testimony and had not been intended to confirm or deny that it was true.

The Kremlin also questioned the veracity of the document, with spokesman Dmitry Peskov claiming that there had been a “mistake on the part of those who wrote the text.” The spokesman also insisted that if deliveries had taken place, they would have been for humanitarian aid rather than supplies for troops stationed there.

“It is not possible,” Peskov said. “There are no armed forces of the Russian Federation on the territory of the self-proclaimed republics at all.”

The Ukrainian government disagreed. A foreign ministry spokesman claimed that Moscow had “created a legal precedent that clearly fixates its status as a party to an international armed conflict.”

The Kremlin has denied sending troops directly to participate in the Donbass conflict but it has supported the two separatist movements there, claiming that the central government in Kiev was abusive towards the country’s ethno-linguistic Russian minority. A 2015 report by Amnesty International claimed that it had seen “compelling evidence of Russian military involvement” in eastern Ukraine during its observation of the conflict.