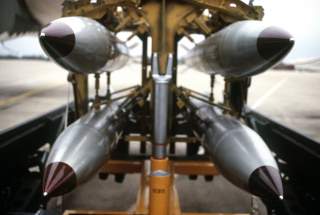 A Russian satellite-based mapping company may have accidentally revealed the locations of at least two sensitive NATO facilities in the Middle East in what can only be described as the OPSEC version of the Streisand effect.

According to a new report from the Federation of American Scientists published Monday, Russia’s Yandex Map “agreed to selectively blur out specific sites beyond recognition” in Israel and Turkey.

But instead of simply downgrading the imagery, Yandex completely removed specific installations from its map, a move that “had the unintended effect of revealing the location and exact perimeter of every significant military facility within both countries” for a total of 300 discrete installations from barracks to airfields, as FAS’ Matt Korda wrote.

Those include two specific NATO facilities: the home of Allied Land Command in Izmir, Turkey, and the contours of the strategically-critical Incirlik Air Base which, as Korda notes, hosts more of the U.S. B-61 nuclear gravity bombs that have seen ongoing testing by the U.S. Air Force than any other NATO facility.

U.S.-based mapping services like Google Maps have actively excluded U.S. military bases at the request of the DoD for years; as recently as August, the Pentagon has had to ban smaller geolocation services outright in order to preserve operational security around sensitive installations.

This is bad, but not as bad as Russian exposure, writes Korda: “Strangely, no Russian facilities have been blurred—including its nuclear facilities, submarine bases, air bases, launch sites, or numerous foreign military bases in Eastern Europe, Central Asia, or the Middle East."

For more on the broader context and implications of this work, we highly recommend you read this conversation between Korda and C4ISRNET’s Kelsey Atherton here.