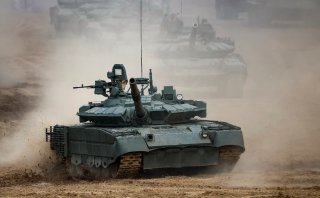 The Russian military currently maintains a small force of T-72 tanks that have been upgraded to the T-72B3M version—also known as the T-72B4. The tanks were first exhibited during the 2014 Tank Biathlon World Championships, and the initial batch of twenty upgraded tanks entered service with the Western Military District of the Russian Army in February 2017.

This week, Tass reported that a batch of thirty T-72B3M tanks arrived at the Russian Army’s 201st military base in Tajikistan as part of its rearmament with advanced weaponry in December 2021. The battalion of the advanced tanks was to boost the capabilities of a motorized infantry unit through improved maneuverability while enhancing the survivability of the tank crews.

Russian personnel have been undergoing training to operate the improved T-72B3M tanks, which offer a variety of improved combat properties.

“In the course of their training, the crews studied the combat capabilities and technical characteristics of the tank, the preparation of its armaments, sighting systems, and ranging equipment. At the Lyaur mountainous proving ground, the tank gunners and commanders conducted fire on the move against the targets located at a distance of up to 2,000 meters from the 125mm guns outfitted with the Sosna-U multichannel sight that cuts the time of detecting and striking targets,” the press office of the 201st military base said in a statement.

In addition, the driver mechanics took part in a variety of exercises including speedy maneuvers, surmounting natural and artificial obstacles, and moving backward using rear-view cameras.

Russia’s Central Military District Commander Colonel-General Alexander Lapin had previously told reporters that a set of measures was underway to further enhance the combat potential of the 201st Russian military base in Tajikistan, including its rearmament with advanced weapon systems.

The Russian Army’s 201st Military Base in Dushanbe, Tajikistan, is Russia’s largest military facility outside of its national borders. It comprises motor rifle, armored, artillery, and reconnaissance units, air defense forces; radiation, chemical, and biological protection and signal troops. Under an agreement signed in October 2012, Russia’s military base in Tajikistan will remain operational until at least 2042.

The Soviet-designed T-72 main battle tank (MBT) initially entered production in 1971 to replace the T-54/T-55 tank series that had been the workhorse of the Soviet tank forces in the latter half of the Cold War. More than 25,000 T-72s were produced including for export.

Moscow has made significant efforts to modernize its aging tanks even as it has developed more modern armored combat platforms, including the T-14 Armata. The T-72B3M is the latest iteration of the ubiquitous T-72, and it features a nearly identical layout with driver’s cab at forward hull, fighting compartment in the center, and the power-pack at the rear. The T-72B3M MBT is still manned by a crew of three, which include a driver/mechanic, a commander, and a gunner.

The middle section of the forward hull of the MBT houses the driver, while the turret accommodates the other two crew members. The T-72B3M is equipped with an advanced fire control system and a new thermal sight. In addition, the mobility and combat characteristics of the tank have also been improved to compete with the most advanced tanks worldwide. The tank is even equipped with radio systems for encrypted digital voice and data transfer, snorkels for deep fording, and a built-in blade for self-entrenching.

Despite the age of the platform, the T-72B3M is capable of engaging and destroying targets with missiles from the halt and on the move, day and night, at ranges of up to 5,000 meters with fire accuracy close to 100 percent. In addition, the tank’s automatic target tracker increases the accuracy of fire against moving targets and substantially cuts the time of preparing for fire.

It is armed with a 2A46M5 125mm smoothbore gun, an advanced version of the 2A46M cannon. It is capable of firing a range of ammunition, including armor-piercing discarding sabot (APDS), high-explosive fragmentation (HEF), and high-explosive anti-tank (HEAT), as well as 9M119 Refleks (NATO codename: AT-11 Sniper) guided anti-tank missiles. The projectiles and missiles are loaded by an auto-loader.

The upgraded T-72B3M has also received an effective protection system that boosts its efficiency both in combined arms warfare and in a variety of combat environments.