Is the Russian Military Running Out of Soldiers? 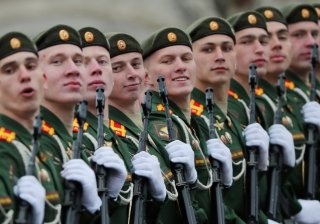 There is a glitch in Vladimir Putin’s war machine, and it is going to bring down his plans for Ukraine and Eastern Europe. It’s a problem that many strategic thinkers will miss, but most sergeants will see right away: the soldiers. There are not enough of them, and that fact affects all the other debates about what comes next in Ukraine.

In 2007, Putin made a now famous speech at the Munich Security Conference decrying the West and United States as threats to the security of Russia and all of Europe. A year later, the Russian military embarked on its most comprehensive modernization effort since the Cold War. The goal was to create a smaller but more modern conventional military capable of projecting power abroad.

Russia’s military power has always rested on two pillars: its conventional ground forces and its nuclear deterrent. After the fall of the Soviet Union, the conventional forces fell into disrepair, shifting the burden of defending the motherland to Russia’s nuclear deterrent. The reforms of 2008 sought to create a more reliable and useful conventional force. Russia’s nuclear force was important in the event of a global conflict, but it was less useful for projecting Russian power abroad.

The fruits of this modernization were seen in the rapid seizure of Crimea in 2014 and in deployments to Syria in 2015 to save the regime of Russia’s client, Bashar al-Assad. The reforms included new weapons, command and control systems, and importantly, a new manpower system which promised to bring in as many volunteers (contract soldiers) as possible.

The war in Ukraine is the first real test of Russia’s new conventional force against another conventional, albeit smaller, military. However, there have been many problems with Russia’s new forces. More specifically, equipment and coordination issues have slowed and sometimes stopped the pace of operations in Ukraine. Despite these tactical problems, Russia has had operational successes. In the span of a month, Russia has occupied large swaths of land in Eastern Ukraine, created a land corridor along the Black Sea coast, and positioned itself outside of Ukraine’s capital, Kyiv. But there is a fatal flaw in Russia’s new military machine that is beginning to manifest itself. The manpower system is about to fail, and it will fail at the most basic level—the soldiers.

The first problem, which has no real solution, is that Russia’s military is unable to fight the war in Ukraine with only contract soldiers even though this is required by Russian law. The Russian military has a mix of contract (volunteer) soldiers and conscripts (draftees). Contract soldiers sign up for a period of service that lasts three or more years. As a result, they are much better trained than the conscript soldiers who serve for only twelve months. Russian law also prohibits the president from deploying conscripts abroad.

According to Russian minister of defense Sergey Shoigu, about 64 percent of Russia’s enlisted troops are contract soldiers. But Russia has committed more than 64 percent of its military forces to the war in Ukraine. CNN reported that U.S. intelligence sources estimated 120 of Russia’s 160 battalion tactical groups—about 75 percent of its ground combat power—were committed to the operation. Since there aren’t enough contract soldiers, a force that size would have to include some conscripts.

Sending conscripts to fight abroad presents a major political problem for Putin. Part of the impetus for the Russian military adopting a contract system is that the Russian people are largely against sending their sons to fight in foreign wars. While Russia’s leaders can ignore the will of the people in some things, they do so in this case with some risk. Notably, it is one of the few laws Putin actually pays attention to. On March 7, in response to rumors that conscripts were serving in Ukraine, Putin declared national television that there were no draftees were being deployed. It was a sign that Putin recognized the importance of the issue. Unfortunately, he was wrong about the conscripts.

On March 8, the day after Putin’s statement and twelve days into the war in Ukraine, the Russian Ministry of Defense spokesman, General Konashenkov, admitted on Russian state television that combat units had deployed to Ukraine with conscripts. The ministry promised that the conscripts were being returned to Russia but, there are signs that many are still involved in combat operations. The continued presence of conscripts, who serve for only one year, greatly degrades the Russian units’ fighting ability of in the field. And the limited number of contract troops ultimately restricts the size of military operations that can be conducted. Along with tactical and operational challenges, manpower deficiencies explain why the Russian military is struggling to achieve its objectives in Ukraine.

A second significant problem for Russian forces is the system for recruiting and discharging conscripts who comprise the other 30 to 40 percent of enlisted soldiers. On April 1, the semi-annual draft cycle will start for the Russian military and about 126,000 conscript soldiers, most of whom serve in the ground and airborne forces, will begin leaving their units, having completed their one-year service obligation. New conscripts will arrive and need to be trained. This process will be repeated in the fall.

How Russia will handle this manpower crunch is not yet clear. Russia’s military forces can continue to cause great destruction in Ukraine for a long time, taking ground and degrading the Ukrainian military’s fighting ability. Russia could even increase the violence by launching more missiles and artillery barrages. But the Russian military cannot conjure new troops and units out of thin air. Whatever happens, the next few weeks will reveal the limits of what the Russian military has the capacity to achieve in Ukraine. It will be less than Putin initially hoped for.

When the fighting stops in Ukraine and the two sides stake out their claims and demands, it is almost guaranteed that Russia’s new conventional military force will be weaker than it was before the war. The force will be far less useful to Putin and Russia as leverage in arguing for a new security framework for Europe. Instead, Russia’s military power will continue to rest almost solely on its nuclear arsenal and the threat to use it. This suggests that any new security arrangement in Europe will be even more unstable and dangerous than before.

Retired Brigadier General Kevin Ryan is a Senior Fellow at Harvard Kennedy School’s Belfer Center. He is founder of the U.S.-Russia Elbe Group and served as U.S. Defense Attaché to Moscow.