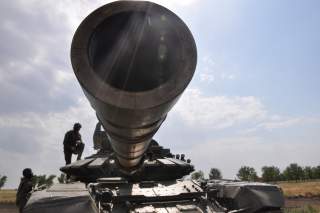 Russian president Vladimir Putin has money to burn on hypersonic missiles, doomsday torpedoes and a military intervention in Syria.

But he doesn’t have money to feed and house the Russian soldier.

“It turns out that defense spending is enormous, and the state will spend, to put it mildly, modest resources on the human factor in the army,” writes Russian journalist Vladimir Mukhin.

Defense spending in 2019 will consume 5.2 trillion rubles, or 28.7 percent of the national budget, according to Mukhin. “However, an increase in the monetary remuneration of servicemen and military pensions is expected in 2019 in a much more modest amount and will be 4.3%. That is, the salaries and pensions of service people will be indexed only by the amount of inflation.”

In fact, while military paychecks did increase between 2012 and 2017, so did inflation. “According to estimates of the Duma Defense Committee, these wages for that period were generally devalued by almost half,” Mukhin notes. The Russian government calculates the total inflation rate from 2012 to 2017 at 46 percent, with food soaring 60 percent.

Other perks of military service are eroding, Captain 1st Rank Oleg Shvedkov, chairman of the Central Committee of the All-Russian Trade Union of Military Men, told Nezavisimaya Gazeta. “The state has lost many other levers that significantly affect the prestige of military service, including the quality of service activity,” he said. Shvedkov complained that “the possibilities of mortgage and savings system for the purchase of apartments by officers and ensigns of apartments each year lag behind the growth of market prices, which reduces the quality of housing for people in uniform.”

Declining health care is also an issue. “There is a shortage of many drugs in military clinics,” said Shvedkov. Nor can soldiers afford the cost of a vacation in a military sanatorium or rest home.

Significantly, Shvedkov suggested that poor wages and living conditions were turning soldiers against the government. “Disillusionment attitudes caused by the government’s reluctance to engage in increasing the level of social protection of a person in uniform are forming in the military environment . . . Voting against the ruling party in the last regional elections in individual military garrisons clearly showed this,” he said.

Historically, living conditions in Russia’s military, whether under the tsars or the commissars, have been harsh. Pay was low, food was meager and discipline fierce. In the Soviet military, recruits also endured brutal hazing from older soldiers.

While Russia still employs conscription to fill the ranks, it is increasingly an army of volunteers, with two-thirds of the force comprised by contract soldiers and the remainder by draftees. And like any volunteer force, pay makes a difference.

But even the supply of volunteers is becoming a problem. Mukhin draws a link between Russia’s defense buildup and military operations in Ukraine, and recruitment issues. “Note that Russia began to spend significant sums on defense and security at the time when the conflict occurred in the Donbas and the Crimea was included in Russia,” he said.

“And in 2015, a limited contingent of Russian troops and aviation was introduced into Syria. While the economic crisis broke out in the Russian Federation, new formations and unions appeared in the west of the country, and the military infrastructure and garrisons continued to develop. The intensity of combat training has increased, and the army has real combat missions. At the same time, the material incentives of military personnel remain very modest. It was precisely since the increase in the monetary allowance of the military was frozen that a turnover of staff, especially contract servicemen, began to be observed in the army.”