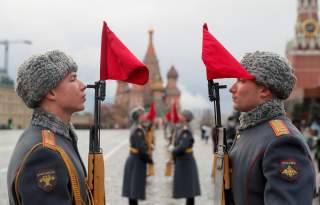 From Borodino to Stalingrad, Russian soldiers have been willing to die to save the Motherland.

But dying to save Russian billionaires? Not so eager, Comrades.

Economic inequality is hurting Russian military morale, warns a Russian military commentator. Oligarchs like Roman Abramovich, worth an estimated $13 billion, are living well while ordinary Russians are not.

“Imagine a situation where private Ivanov approaches the commander and says: ‘Why should I protect Abramovich’s oil rigs and shed blood for the oligarchs, if my mother, who has worked as a nurse for 50 years, has a pension at the subsistence minimum?” asks retired Colonel Viktor Baranets, a former military-political officer, in an interview with the Russian defense publication Military-Industrial Courier [English translation here].

The Russian military has recently revived the Soviet concept of political officers to boost the morale of soldiers. But nothing depresses military morale like a national poverty rate of more than 20 percent. “To educate the younger generation on the basis of patriotism is good,” Baranets says. “But I think we will not raise patriotism if the people only have a little borsch on their plates. If the soldiers ask political workers why there such a gap between the rich and the poor. Why in an immensely resource-rich country are 20 million people destitute?”

It’s not just the gap between rich and poor that’s a problem. Corruption is a problem in Russian (and sometimes American) society, and corruption is especially corrosive when the crooks are within the military itself. Military corruption quadrupled to 7 billion rubles ($108.8 million) in 2018, according to Russian military prosecutors. More than 2,800 officials have been charged with violating anti-corruption laws.

“Given that the number of crimes in this category has not been reduced, and the amount of damage caused by them has grown fourfold and exceeded 7 billion rubles, it is necessary to step up measures to curb such manifestations as part of the national anti-corruption plan,” said chief military prosecutor Valery Petrov.

However, Baranets doesn’t believe that better pay and living conditions alone will improve military morale. “A soldier should not say that he will not go to war, for example, with the Americans, because they pay him little. If you worship the golden calf, it is easy to turn into a mercenary - the one who pays the most is the one you serve.”

What is also needed is better political indoctrination. Baranets wants the new political officers to avoid the mistakes of their Soviet predecessors. “Let us recall how much there was in the times of the USSR all pretense, paperwork. Political workers wrote thousands of reports, references, reports, reports, but they did not always find time to sit down with the soldier in the barracks and talk.”

But this being Russia, the Russians figure depressed military morale can’t simply be only a function of income inequality. Foreign powers and traitors must also be responsible. “The army is increasingly becoming a serious card in the hands of a certain liberal community, which in opposition to the authorities is trying to draw the armed forces into these games,” Baranets warns. “I’m not talking about the fact that Western propaganda is trying in every way to manipulate the brains of our servicemen, to sow doubt about the correctness of the political course of the country’s leadership.”

He also wants counter-propaganda to counteract foreign attempts to “manipulate” the brains of Russian soldiers. “We in the structure of the Defense Ministry of the Russian Federation do not have a department that would protect servicemen from the flood of lies and slander from abroad. Although, as the leaders of the GUVP [Main Military-Political Administration] told me, counter-propaganda should become one of the most important areas of work.”