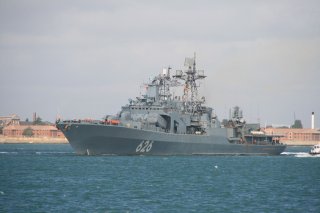 During the so-called “Golden Age of Piracy” of the seventeenth century, it took squadrons of Royal Navy frigates as well as other European nations to finally clear the waters of the eastern seaboard of North America and the Caribbean from notorious buccaneers. Now it seems that it could once again take national and even international efforts to address the issue of modern piracy off the African coast.

While Somalia was notorious for pirates near the Horn of Africa a decade ago, the seas of West Africa’s oil-rich coastline are now considered the most dangerous for shipping.

Successful multi-national efforts on Africa’s eastern coastlines, as well as efforts on land to prosecute criminals, have improved the situation near Somalia, but now the hotspots are the coasts of Benin, Ghana, Nigeria, Congo-Brazzaville, and Cameroon, the BBC reported.

Russians to the Rescue

On Tuesday, Russia’s Defense Ministry uploaded a video that showed one of its warship’s marine corps squad liberating a civilian cargo ship from pirates in the Gulf of Guinea. The video footage, which has been posted online, showed the elite unit from the large anti-submarine destroyer Vice Admiral Kulakov landing on the Lucia container ship and inspecting the vessel.

The Panama-flagged container ship had been bound from Togo to Cameroon and was approximately eighty-six nautical miles southwest of the offshore Agbami Oil Terminal, located approximately seventy nm south-southwest of the Niger Delta, when she was attacked by pirates. After receiving a distress signal, the Russian warship sent a Kumov Ka-27PS helicopter with the combat-ready squad to liberate the vessel.

A task force from the Russian Northern Fleet has been on an anti-piracy mission in the Gulf of Guinea over the past three weeks. It consists of the rescue tug Altai, the medium sea tanker Akademik Pashin and the large anti-submarine warfare (ASW) vessel Vice Admiral Kulakov. The Russian marines are providing security for shipping and monitoring the maritime situation using deck-based aviation.

International authorities praised the Russian efforts but noted that more can be done.

We welcome the decrease of piracy and armed robbery attacks in the Gulf of Guinea and the efforts taken by maritime authorities in the region,” Michael Howlett, Director, ICC International Maritime Bureau, said in a statement. “However, there needs to be sustained efforts to ensure the continued safety of seafarers as they transport essential goods throughout the region. Coastal States must redouble their coordination and security measures to ensure that piracy and armed robbery incidents continue to decline.”

This is not the first time that the Russian Navy has successfully conducted anti-piracy operations near African waters. In January 2010, the Russian Navy concluded a two-month mission in the Gulf of Aden, during which the flotilla—including the Udaloy-class missile destroyer Marshal Shaposhnikov had escorted over one hundred commercial vessels.

More than a year earlier, in October 2008, Russia joined international anti-piracy efforts off the Somali coast, and it maintained a consistent presence in the region with warships operating on a rotation basis. Now along with other world powers, Russia has been sending warships to the western coast of Africa, and perhaps this will also help reduce the number of incidents involving pirates.