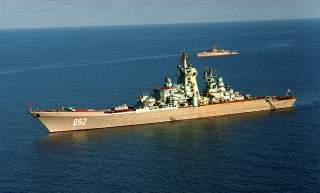 The recycling of the battlecruisers Admiral Ushakov and Admiral Lazarev will leave in service at most two vessels in the class, accelerating the fleet’s evolution into a leaner but more modern force.

Battlecruiser Petr Velikiy is the flagship of the Northern Fleet. Admiral Nakhimov awaits repairs at the Sevmash shipyard in Severodvinsk, a port city on Russia's White Sea.

826 feet long and displacing 24,000 tons, the 1980s-vintage Kirovs by far are the largest surface combatants in the world. The Soviet navy planned to deploy them against American carrier battle groups and supply convoys.

But that has proved too costly for the cash-strapped Russian navy. The Izvestiya newspaper reported that Admiral Ushakov and Admiral Lazarev will be recycled.

Admiral Nakhimov, too, is in trouble, according to Russian Defense Policy:

In mid-2013, the [Ministry of Defense] gave Sevmash a contract for Nakhimov’s repair and modernization. It was supposed to return to the fleet in 2018. But work on the ship didn’t commence until October 2014. About this time it was expected to rejoin the navy by 2020.

The repair and modernization of Petr Velikiy will obviously be put off until Nakhimov is done.

There are rumors the Russian navy soon also will decommission its only aircraft carrier Admiral Kuznetsov, which in October 2018 suffered serious damage at the 82nd Repair Shipyard in Roslyakovo, a northern port city, when the PD-50 dry-dock sank while Kuznetsov was aboard for repairs.

Moscow had planned on extending the service lives of its carrier and other warships from the 1980s in order to complement the newer vessels. For long-range deployments across the Atlantic or to war zones such as Syria, Russia tended to send Kuznetsov and equally aged, Soviet-built destroyer and cruisers.

Now the Kremlin might no longer have that option. But that doesn’t mean Russia can’t deploy naval power. The Russian fleet’s newer corvettes, which are a fraction of the size of a Cold War cruiser, lack range and must remain close to home.