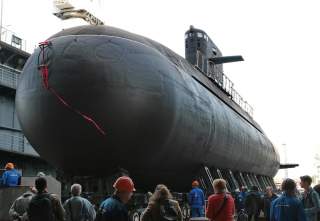 The Russian Navy may be getting small, hard to detect submarines for landing frogmen.

Two Russian design bureaus have proposed submarines that run on air-independent propulsion, or AIP, a non-nuclear power system that is so quiet that anti-submarine forces have trouble detecting them.

“Ministry of Defense representatives do not hide the fact that they would like to have new types of non-nuclear submarines in our fleet that would combine the advantages of nuclear submarines with smaller dimensions and less acoustic signature,” according to Russian publication Rossiyskaya Gazeta. It has been reported that the Rubin Central Design Bureau of Marine Engineering has been working on a project of such a submarine with an air-independent power plant for several years.”

AIP, conceived by German scientists in the 1930s, was intended to mitigate a problem of pre-atomic submarines with diesel engines: they either had to surface frequently to replenish their air supplies for propulsion and life support, or they had to broach the surface with a detectable snorkel. AIP works by using a power source that isn’t dependent on gulping air from the surface, such as fuel cells and closed-cycle engines. This allows conventionally-powered subs to remain submerged like nuclear subs.

In addition to greater underwater time, AIP also offers an important side benefit: engines that are far quieter than the elaborate machinery of a nuclear-powered submarine. So quiet that the U.S. Navy worries that it might not be able to detect AIP subs operated by nations like Iran.

The Russia Navy has been offered designs by two contenders: Rubin, and the Malakhit design bureau. The Malakhit design offers “1,200 miles nonstop range under water, maximum diving depth 300 meters [984 feet], cruise length up to 30 days, crew of 18-20 plus a team of 16 commando frogmen,” Rossiyskaya Gazeta said. “The specifications are based on the condition that the submarine has an air-independent (otherwise known as anaerobic) propulsion unit, based on an innovative closed-cycle gas turbine engine.”

The Rubin design bureau has been involved in a project “to build an example of a ship’s air-independent propulsion unit and a special floating rig for testing the AIP unit in conjunction with a lithium-ion storage battery.”

The Malakhit sub isn’t very large, with a length of about 66 meters (216 feet), a beam of 7 meters (23 feet) and a draft of about 5 meters (17 feet). That makes it about half the length of a U.S. Virginia-class attack submarine.

Which illustrates the biggest drawback of AIP-powered subs: they don’t have much power. “The maximum power output of current AIP installations is typically on the order of 400 horsepower (300 kilowatts),” according to a U.S. Navy analysis. “... a typical nuclear submarine propulsion plant produces over 20,000.”

On the other hand, the U.S. Navy is a global force that requires vessels that can operate for long periods in distant oceans, so big ships with big power plants are necessary. Though capable of operating ships in overseas locations such as the Syrian coast, the Russian Navy is more of a coastal defense force for which AIP subs are well-suited.

For naval commando operations, where the key is for the sub to quietly launch and retrieve its frogmen and then leave, small AIP subs may be just the ticket.