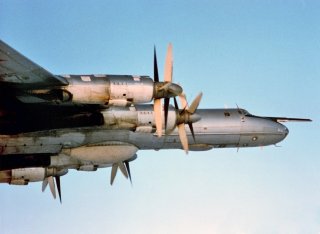 Russian patrol planes in early 2020 have flown a surprising number of long-range missions across Europe. One former U.S. Army general thinks he knows why.

Retired lieutenant general Ben Hodges, who commanded Army forces in Europe from 2014 to 2017, told The Irish Times Russia could be “mapping out the contours” of radar coverage around the Greenland, Iceland and the United Kingdom.

The so-called GIUK Gap is a maritime chokepoint through which Russian aircraft and ships might have to pass in order to engage NATO forces during wartime.

Russia could consider Ireland, which is not a NATO member, as “a seam that could be exploited,” Hodges said. The Royal Air Force patrols Irish air space with supersonic Typhoon fighters.

Those fighters and other NATO warplanes have been busy in recent months as Russian aircraft surge from their bases in the country’s north. On and around March 11, 2020, a pair of Russian navy Tu-142 patrol planes flew one of the longest-ever flights in international air space in decades.

The powerful, swept-wing planes with their four turboprop engines flew from Kipelovo-Fedotovo air base near Vologda in northern Russia, skirted the Arctic Circle as they headed west around Norway and the United Kingdom then south to the waters off Spain -- and then flew back.

NATO fighters rose to intercept the 174-feet-long Tupolevs, but at no point did the planes, which are based on the Tu-95 bomber, stray into any country’s national air space.

The impressive flight was just the latest in a surge of sorties by the small fleet of around two dozen Tu-142s, which with their nearly 8,000-mile endurance are among the farther-flyest military aircraft in the world.

The Tu-142 and other Russian long-range warplanes have flown several epic missions in the spring of 2020, in part in order to keep tabs on NATO submarines conducting exercises in European and Arctic waters.

The March 11, 2020 sortie might have targeted NATO submarines participating in the alliance’s Cold Response war game. NATO canceled Cold Response in reaction to the rapid spread of the flu-like novel-coronavirus, but the submarines may have lingered in the exercise zone.

The Norwegian air force scrambled fighters to check in on the Tu-142s as they passed by Norway. It’s unclear which types the Norwegians launched, but Oslo’s air arm earlier in March 2020 sent F-16 and F-35 fighters to intercept a patrol by a Tu-142 and an escorting MiG-31 interceptor.

The Royal Air Force with its Typhoon fighters took over as the Russian patrol planes neared United Kingdom air space. “These Russian bombers do not comply with international air traffic rules, are a hazard to airliners and are not welcome in our air space,” Air Chief Marshal Mike Wigston stated. “RAF Typhoons, alongside our NATO allies, ensured these Russian aircraft posed no hazard.”

But the Russians were back at it a few days later with a pair of Tu-160 long-range bombers. Again, RAF fighters rose to intercept.

The Russian patrol surge isn’t limited to Europe. On March 9, 2020, a pair of Tu-142s took off from Russia’s Far East region and flew northeast over the Arctic.

U.S. Air Force F-22s and Canadian air force F/A-18s simultaneously intercepted the patrollers and followed them as they flew over a temporary base for two U.S. Navy submarines conducting the service’s biennial ice exercise.