Russian Troops Are Staying at Ukraine’s Border—What Should Washington Do About It? 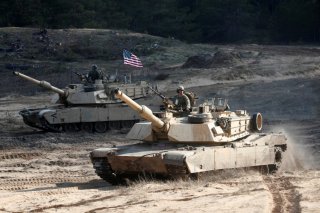 Threatening formations of Russian forces along the border with Ukraine have not sufficiently disappeared, a scenario of likely concern to the United States, NATO, and of course, Ukraine.

“Moscow announced a pullback late last month but has since withdrawn only some troops and equipment, a U.S. official said,” according to an article in the Wall Street Journal.

How large of a threat would the continued existence of heavily armored Russian forces consolidated and maneuvering along the Ukrainian border present? Could any kind of NATO, Ukrainian, or U.S. resistance stop, blunt, or at least seriously impair and slow down a Russian advance?

The existence of more Russian tanks compared with the United States raises an interesting question. Just how much would it matter to have thousands of more tanks in any kind of protracted ground war? Would that many tanks be destroyed in a multi-year ground conflict, creating a scenario that would ultimately favor an invading Russian ground force?

The Russian annexation of Crimea in 2014 is certainly not forgotten at the Pentagon, as many senior U.S. military officials made a point to call Russia’s military operations a “wake up call” for the United States as it pursues a number of pressing modernization initiatives. Russia’s use of EW, drone targeting, and networking, among other things, have been regularly cited as areas of concern to the Pentagon. These things may be considered far more pressing of an immediate threat than the actual size of any Russian armored force. For quite some time, Russia is known to operate much greater numbers of tanks than the United States, however, any margin of superiority is likely to be determined in terms of networking weapons range and other kinds of mechanized warfare dynamics. Nonetheless, the Russian ground arsenal is formidable and likely to be the focus of much attention among NATO planners and strategists now analyzing the Ukraine situation.

While Russia is known to operate the ultra-high-tech T-14 Armata tank, there are many who say they simply do not have that many of them, or enough to present any kind of a decisive threat. The Russian T-72B is regarded as a third-generation tank variant of the 1980s-era T-72, something which could loosely be paralleled to the years of innovations poured into the U.S. Abrams. Interestingly, the Global Firepower breakdown cites that the U.S. has more armored vehicles total compared to Russia. The United States operates 39,000 armored vehicles compared to Russia’s 27,000. That being said, Russia’s 6,000-plus tank advantage cannot be overlooked.

However, any modern war between the United States, NATO, and Russia along the Ukrainian border would also likely heavily rely upon airpower, and the United States has more than twice the combat aircraft as Russia and nearly five times as many helicopters. Air supremacy might ultimately decide which ground force prevails on the ground, as Russia’s tanks would be vulnerable to destruction from the air should the U.S. gain air superiority.

There are several other factors to consider, such as the current technological condition and sophistication of Russia’s tanks. How many T-72s have been upgraded such that they might in any way be comparable to an Abrams? After all, even though many details related to technical upgrades to T-72Bs might not be available, it is unlikely that they rival the upgraded U.S. Abrams.