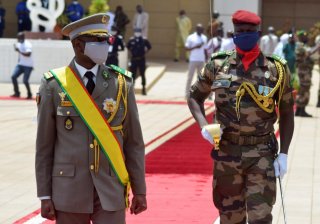 Reports have surfaced last week that the government of Mali is about to reach an agreement with Russia’s Wagner group—a shadowy paramilitary company (PMC)—to provide military assistance and training to Mali’s security forces. Even the prospect of such a deal has raised concerns in Western capitals over Russian intervention in the Sahel, and Africa more broadly, which some fear would come at the expense of Western interests. This concern ignores a more pressing danger: Mali’s civilian population is likely to pay the price if Wagner enters the fray, and Western governments are likely to react in unhelpful ways.

If such an agreement does proceed, then Mali’s military regime would be the next in a line of African countries—including Libya, Mozambique, and the Central African Republic (CAR)—that have seen Russian PMCs enter a protracted conflict. Should the deal be anything like the ongoing partnership between the government of the Central African Republic and Wagner, we can expect not only international outcry over the perceived expansion of Russia’s influence in Africa but also worsening humanitarian and protection trendlines for Mali’s civilian population.

Although Mali and the CAR’s protracted conflicts are different, they share key similarities. They both have weak central governments and national security forces struggling to thwart armed groups. Both countries host United Nations peacekeeping missions. And both have crafted peace deals whose validity and efficacy are subject to debate.

In 2017, Russia signed a deal to provide military assistance and training to the CAR in exchange for mineral concessions. The results of this partnership have been decidedly mixed, to say the least. Here are some of the many trends we can expect in Mali and how it may impact the country’s deteriorating humanitarian catastrophe.

Earlier this year, a group of UN experts indicated it had received numerous “reports of grave human rights abuses and violations of international humanitarian law, attributable to [the Wagner Group] operating jointly with CAR’s armed forces.” These atrocious offenses are widespread—including torture, mass executions, arbitrary detentions, forced disappearances, and violent persecution based on ethnic and religious grounds—and there is reason to believe that Wagner’s tactics would be no less egregious in Mali.

In the CAR, the Wagner Group is increasingly carrying out vicious attacks on the country’s Fulani, or Peul, Muslim minority. Given that this community is one of Mali’s largest minority groups, and already the target of repeated violent persecution, there is considerable reason to worry that Wagner may continue its abhorrent practices.

Although both the CAR and Mali have long been rife with impunity—by design and due to a lack of capacity—the situation could further deteriorate. The Central African experience, in which the government has yet to make a good faith effort to transparently investigate or prosecute Russian offenders, could very well be mimicked in Mali. There, the government could also dangerously over-prioritize military gains at the expense of rule of law and civilian protection.

If Wagner employs similarly brutal tactics in Mali as those they have used in the CAR, it is reasonable to expect that Malian civilians will pay the price with their safety and lives—being forced to flee and losing access to necessities and services. This is already a reality for millions of Malians, and the arrival of the Wagner Group is unlikely to translate to better civilian protection or service provision. We can assume more citizens will join the ranks of Mali’s 5.9 million people who are already in need of humanitarian assistance and the 976,000 who are currently displaced by the crisis. Alarmingly, the Wagner group may follow suit and interrupt and complicate humanitarian aid delivery in Mali and threaten the lives of displaced citizens, much like they have in the CAR.

Engaging Through the Lens of the Global Power Competition

The world is already beginning to react to this alleged imminent cooperation. Since the onset of Mali’s current crisis in 2012, the national and international response has been overly militarized, at the expense of effective engagement funding to address the rampant humanitarian need, improve governance, and address long-standing grievances. This potential new partnership, or its threat, risks instigating yet another security-focused response from the international community.

In the CAR, Wagner’s arrival prompted a massive increase in international attention and engagement in a small country that had often been ignored by foreign governments and the media alike. Then all of a sudden, those working on foreign and security policy in capitals around the world became obsessed with countering Russian influence in the country, instead of realizing that their years of inaction had created fertile ground for this relationship of strange bedfellows to grow.

While international attention on Mali has been more significant than in the CAR’s pre-Wagner years, there is the real possibility that Western countries—especially the United States—will develop new policies in Mali through the lens of the great power competition. This reactive approach is fraught and could lead to policies aimed solely at decreasing Russia’s influence in the country, rather than addressing the real roots of Mali’s years of conflict.

On the other hand, the Malian government could be trying to leverage French and U.S. fears of Russian dominance on the continent to serve its interests. While this dangerous power play could have very dangerous consequences for the civilian population, France and the United States have the opportunity to avoid falling into the great power competition trap by re-crafting their engagement to effectively address the roots of the conflict. Otherwise, Mali will be left with but to partner with predatory PMCs.

Both countries’ relationships with France, their former colonial ruler, have long been complicated. In the CAR, this troubled relationship worsened as the government’s relationship with Russia and the Wagner group developed. In June 2021, tensions came to a head when France severed ties—and an estimated 10 million euros of aid—with Bangui. France’s decision to cease funding at a time when more than half of the CAR’s population requires humanitarian aid was a dangerous and irresponsible one.

Just hours after the story of Wagner and Mali’s upcoming deal was released, rumors began circulating that France is considering cutting ties with the Malian government and ending its long-standing military presence in the country. While France may think that adopting similar hardline approaches may sway the governments of the CAR and Mali, they must remember that such brash policies have severe impacts on populations who rely on international aid.

If reports are true and a deal is close, the consequences for Mali’s population could range from grave to deadly. But regardless of whether Wagner is moving in or if Bamako is simply trying to instigate international action, civilians must remain at the forefront of the international community’s interest in Mali. Disproportionate engagement on the country’s troubled security landscape cannot continue to overshadow the worsening humanitarian crisis and the need for improved governance, and long-lasting peace.

Alexandra Lamarche is Refugees International’s Senior Advocate for West and Central Africa, where her work focuses on conflict and displacement crises. Twitter: @AlyLamb.

The views expressed here are those of the author and not necessarily those of Refugees International.