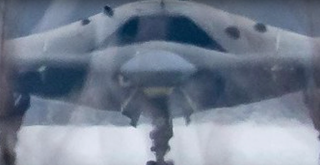 Russia’s prototype stealth drone has flown for the first time.

On Aug. 3, 2019, a Hunter-B jet-powered unmanned aerial vehicle took off from a military test site. The flying-wing-shape drone flew for more than 20 minutes at a maximum altitude of around 2,000 feet, reported TASS, a state news organization.

Hunter-B’s first flight inches Russia closer to fielding fast, armed drones for front-line missions. But there’s still a lot of work to do.

A Hunter-B was on the flight line when Russian president Vladimir Putin on May 14, 2019 inspected the country’s latest warplanes.

Hunter-B could require years of development before it enters front-line service, if it ever does so. The Kremlin likewise needs time to develop the munitions, support systems and manpower to support high-performance drone operations.

"At this point, it is going to be heaviest and fastest UAV [in Russian service] if and when fielded, but additional testing and evaluation will have to take place in order for this unmanned system to be fully functional,” explained Samuel Bendett, an expert on the Russian military. “Its speed [up to 620 miles per hour] and weight — up to 20 tons — means that a host of aerodynamic, electronic and high-tech issues need to be worked out."

To be effective in service, Hunter-B will need small precision-guided munitions, Cooper told The National Interest. The Kremlin long has lagged behind the rest of the word in PGM development.

But Russia's biggest potential liability as a drone power, as well as the greatest advantage America possesses, is invisible to the naked eye.

It's not hard to build an airframe. Twenty-something cadets at the U.S. Air Force Academy in Colorado managed all on their own to build a stealthy drone airframe.

What's hard, when it comes to deploying fast armed drones to meaningful military effect, are the communications, control systems and computer algorithms—and the techniques and tactics for operating unmanned aerial vehicles over long distances in crowded airspace alongside manned aircraft and other forces.

"The U.S. has literally decades of experience operating unmanned systems, from battlefield use in places like Iraq and Afghanistan to successful tests taking off and landing on aircraft carriers," said Peter W. Singer, the author of several books on high-tech warfare. "Neither Russia or China has that."