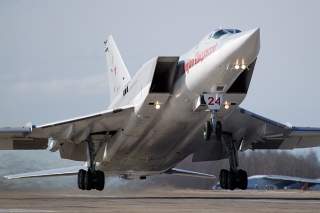 Despite its occasional flashes of inspiration when it comes to military tech, Russia is still touting the same Cold War-era bomber fleet that threatened naval carrier task forces with the specter of cruise missile destruction throughout the 1980s.

But now, the marque TU-22M3 ‘Backfire’ bomber that was comparatively a cheaper, shorter-range version of the United States’ B-1B Lancer, is finally rolling off the lot with the ‘M3M’ designation upgrades it needs to fight well into the 21st century.

- TU-22M3M Backfire, already capable of flying at over 45,000 feet and up to Mach 1.4 with a range of 3,000 miles, is getting its legacy communication, weapons, and navigation systems upgraded to match the TU-160M2 Backfire. The upgraded nav system will be primed to use the Russian version of GPS, Glonass, which eliminates dependence on American satellites for both navigation and guided weapons.

- The most significant weapons upgrade is also its scariest: The bomber is also now capable of carrying Kh-15 airborne ballistic missiles, enabling it to function as a nuclear strategic bomber, adding one more arrow to the Russian nuclear quiver.

- But wait, there’s more! In July a Tu-22M3 accompanied a MiG-31 toting a hypersonic Kh-47M2 Kinzhal missile, hinting at a future capability for the Backfire bomber as a rival to Chinese and U.S. hypersonic aspirations. Finally, Aerospace Force Commander Viktor Bondarev told the Russian news service TASS that ‘the planes are being adapted for being furnished with modern Kh-32 precision cruise missiles and also with hypersonic missiles’.

The Backfire bomber has been a cornerstone of Russian close air support for the last three decades, with combat time over Afghanistan in the 1980s, Chechnya in the 1990s, Georgia in 2008, and, most recently, over the skies of Syria in support the Assad regime. The rollout of the TU-22M3M version of the airframe is clearly part of a concerted effort by the Russian military to modernize and upgrade their military forces after the 1990s.

The hawks in the Russian government are known as the Silovik, politicians who were birthed from the security services of the Soviet Union, and afterward, the Russian Federation. These pols have been pining for modernization of their strategic military forces to keep pace with the United States since the dark ages of Russian military, also known as ‘the 1990s.’ With a hypersonic weapon capable Tu-22M3M, they may not be far off.