Russia's Battlecruisers: The Battleships of the 21st Century? 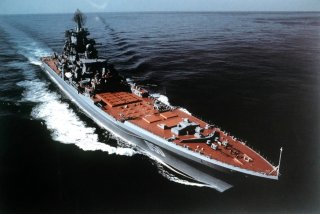 The United States Navy currently has eleven aircraft carriers, and these are often described as the world's most powerful warships in service today.

By contrast, Russia has just a single carrier, Admiral of the Fleet of the Soviet Union Kuznetsov (Admiral Flota Sovetskogo Soyuza Kuznetsov), which is currently undergoing repairs and may not re-enter service until late next year at the earliest. Even then, the capabilities of the Russian carrier will fall short of the American carriers.

Russia's Battlecruiser Is Making a Comeback

However, the Russian missile cruiser Admiral Nakhimov could also lay claim to being the world's most formidable warship when she eventually reenters service.

Moscow has certainly touted the vessels increasing capabilities, even as the heavy nuclear-powered missile cruiser (battlecruiser) is currently undergoing a refit and renovation. While it has been reported that the ship's return to service has also been delayed until "at least" 2023, Andrei Dyachkov, CEO of Severnoye Design Bureau, claimed the ongoing efforts would transform the vessel into the world's strongest surface combatant.

"The high modernization potential integrated in these ships (Project 1144 and Project 1142) upon their designing helped carry out certain works and outfit the Admiral Nakhimov with the most advanced weapons, which makes it the world's strongest surface combat ship," said the chief of the Severnoye Design Bureau, which is part of the United Shipbuilding Corporation, in an interview with Tass.

The heavy nuclear-powered missile cruiser has been undergoing repairs at the Sevmash Shipyard since 1999; however actual work on the warship only began in 2013. Moscow has repeatedly claimed that the upgrade has substantially boosted the cruiser's strike capabilities.

Dyachkov further explained that even as more advanced "ships of the 21st century" have emerged, including the Project 1144 and Project 11442 heavy nuclear-powered missile-carrying cruisers designed by the Severnoye Design Bureau, the Cold War era Admiral Nakhimov has remained the symbol of both the design bureau and the Russian Navy.

The warship is the third of the Kirov-class (Project 1144 'Orlan') and was laid down at the Baltic Shipyard on May 17, 1983. Flowed out in April 1986, she was commissioned into the Soviet Navy in December 1988 as the Kalinin.

While serving in the Russian Navy after the collapse of the Soviet Union, the warship was renamed in 1992 in honor of Pavel Stepanovich Nakhimov, one of Imperial Russia's most famous admirals. He was the commander of the naval and land forces during the Crimean War's Siege of Sevastopol. Five other warships have been named in his honor.

Early in April, the Russian Navy was told the handover of the battlecruiser would be a little while longer in coming. While she had been scheduled to re-enter service next year, the delivery has been pushed back due to problems with the suppliers. However, once the refit is completed, Admiral Nakhimov will be outfitted with various radars and advanced sensors, while it will be fitted with a variety of offensive and defensive weapons.

The upgraded cruiser will be armed with hypersonic Tsirkon missiles, anti-ship Onyx missiles and Kalibr cruise missiles. The air defense systems include the Fort-M and Pantsir-M, while the battlecruiser will also carry a variety of powerful antisubmarine weapons.