Russia's Black Sea Fleet Is Getting Ready for War 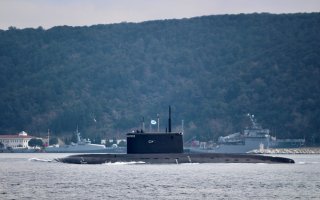 The Russian Black Sea Fleet quickly engaged an enemy naval force and aircraft in a serious show of force earlier this month, but it wasn't against an actual enemy but part of live-fire drills and exercises against simulated targets. The Russian News Agency TASS reported that this included anti-submarine drills.

The patrol vessel Vasily Bykov and the small anti-submarine warship ships Kasmov and Yeisk held drills in the Black Sea to search for and track a notional, or theoretical, enemy submarine. The crews took part in comprehensive training that included employing torpedo weapons and carrying out bombing against the enemy. In the course of the operations this included searching for and tracking a submarine.

"As part of combat training measures, the sailors performed preparatory and qualification artillery firings against sea and air targets," A Russian Ministry of Defense press office said in a statement. "At the final stage of the firings, the sailors practiced the algorithm of measures for the ship's air defense during its transit at sea, with close-in jamming actions."

Earlier this month planes and a submarine from the Black Sea Fleet also held an exercise to destroy a group of hypothetical enemy ships.

"The crews of frontline bombers Sukhoi-24M and air defense planes and the submarine Kolpino have carried out a joint exercise to deliver a rocket and bombing strike against a group of ships of a hypothetical enemy in the Black Sea," a fleet press-service report noted.

For that exercise the Russian Navy's frigate Admiral Essen and the small missile ship Orekhovo-Zuyevo played the role of the enemy warships. Both were quickly spotted by drones, which transmitted the targets' location to the Kolpino, which then carried out an electronically simulated attack against the enemy with cruise missiles. It also performed maneuvers to escape hypothetical attacks from anti-submarine weapons.

The Kolpino is one of the Kilo-class diesel-electric submarines that were designed and built for the Soviet Navy. Currently there are 61 of this class of submarines in service with the Russian Navy.

The drills came after Russia's National Defense Control Center reported that the U.S. Navy's USS Porter (DDG 78), an Arleigh Burke-class destroyer, had sailed through the Dardanelles and Bosporus and entered the Black Sea. The movements of the U.S. Navy warship, which has the motto "Freedom's Champion," were closely monitored by the Russian Navy during the exercises.