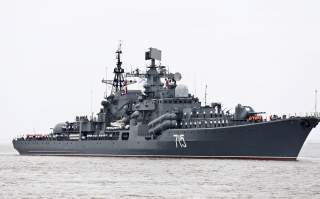 The Russian Navy is planning to upgrade their 3M14 “Kalibr” cruise missile with a longer-range “Kalibr-M” variant, according to Russian state media.

As a military insider source told TASS earlier this week, "The newest high-precision ship-based Kalibr-M cruise missile with a maximum firing range of more than 4,500 km is being developed for the Russian Navy. The creation of the rocket is at the stage of scientific research and financed by the Ministry of Defense."

By comparison, the original ship-launched Kalibr missile has a range of 1,500- 2,500 kilometers. Presumably to accommodate a roughly two-fold range increase, TASS’ source adds that "It will be much larger, the weight of its warhead will approach 1 tonne.”

However, it doesn't seem that these increased dimensions will adversely affect the missile’s vessel compatibility outside of corvettes. The source expects that Kalibr-M can be fitted on “large surface ships” from frigates onward as well as nuclear submarines, including Russia’s latest Yasen-class line. Notable 3M14 frigate fittings include Russia’s Admiral Grigorovich-class Admiral Makarov, and Admiral Gorshkov from the new Project 22350 class. Admiral Gorshkov and the four other vessels in its class are particularly likely candidates for Kalibr-M, provided that the Russian Navy has addressed the technical problems plaguing their earlier development process.

It remains to be seen what other improvements, if any, Kalibr-M will offer over its predecessor; it will be particularly interesting to see if the manufacturer is planning any tweaks to its active-radar homing system or additional electronic countermeasure (ECM) tools.

Compatible with conventional and nuclear warheads alike, TASS’ source says that Kalibr-M is intended to “destroy land facilities.” Kalibr-M’s predecessor was used for precisely this purpose in Syria, where it was launched from Kilo-class submarines against ISIS emplacements in the Raqqa region.

How will Kalibr-M fare against the competition?

The Kalibr suite was designed to compare favorably with Washington’s prolific, but aging Tomahawk cruise missiles. Whereas the original Kalibr 3M14 traded performance blows with the Tomahawk’s Block IV revision in what amounts to an approximate draw tilted slightly in Kalibr’s favor, Kalibr-M drastically outranges its US counterpart at 4,500 against 1,700 kilometers. The Kalibr-M will also be at least as fast as the 3M14 at 2.5 mach or about 3,000 kilometers per hour, as compared with Tomahawk’s 880 km/h.

There are currently no publicly known Russian plans to develop and deploy land-based Kalibr-M variants, something that is prone to change with the possible dissolution of the Intermediate-Range Nuclear Forces Treaty (INF).

Even before this massive range upgrade, US defense officials expressed concern about Kalibr’s long reach. "They're firing the Kalibr missile, very capable missile," said Admiral James Foggo III, commander of US Naval Forces Europe. "It has a range which, if launched from any of the seas around Europe, ... could range any one of the capitals of Europe. That is a concern to me, and it's a concern to my NATO partners and friends."

If Kalibr-M lives up to its purported capabilities, these worries are about to grow more acute.