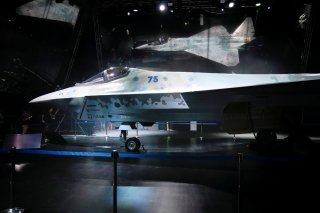 State defense manufacturer Rostec has unveiled the latest Russian fighter on the first day of the 2021 edition of the biennial MAKS airshow.

The new fighter was developed by Rostec subsidiary Sukhoi under the Light Tactical Aircraft (Russian acronym LTS) program. Russian president Vladimir Putin inspected the aircraft and was briefed on its specifications prior to its public unveiling. United Aircraft Corporation (UAC) head Yuri Slyusar reportedly told Putin during the plane’s presentation at the Sukhoi pavilion that it is a “new-generation multipurpose platform that could be adapted to requests of a specific client,” adding that it “also features wide combat capabilities and low operating cost.”

The plane’s specifications, design, and loadout have not fully been confirmed as of the time of writing. Here is what we currently know: the new aircraft is a light, stealth-oriented, single-seat fifth-generation fighter that’s smaller and less specialized than the Su-57. Rostec head Sergey Chemezov added that the new plane will boast a top speed of 1,900 kilometers per hour, an operational range of around 3,000 kilometers, and a payload capacity of “over seven tons.”

The full extent of the fighter’s “adaptability” remains unclear, but importers will apparently be able to customize its loadout to suit their specific needs. Sukhoi’s own export-oriented Su-30, which spawned numerous variants with vastly different weapons and avionics loadouts, offers a relatively successful precedent for this kind of design approach. But the manufacturers are taking the concept of modularity a step further, telling reporters that the plane can apparently be  “converted” into unmanned and two-seat versions, thus drastically altering its capabilities and mission purpose.

Chemezov added that the new plane will have a per-model cost of around $25 to $30 million, which he says is the current market sweet spot between capabilities and affordability. “This is a light fifth-generation fighter. There are analogs [to this fighter] in the world. That is the F-35, Gripen, and Rafale. But we prioritized delivering an affordable and [cost-]effective fighter. Our price will be, I hope, around $25 to $30 million, while theirs is $60 to $90 million,” he said. Russia’s new fighter appears to be undercutting its competitors by a substantial margin, though it remains to be seen how much the baseline cost will get marked up after country-specific modifications, enhancements, and conversions are factored in. Chemezov specified that the new fighter will be able to carry a wide range of weapons— including guided as well as unguided missiles and bombs— that are consistent with its multi-role design.

There is still no official name for the new plane as of the time of writing. Insiders reportedly referred to the fighter as “Checkmate,” but this could be nothing more than an internal project name.

The manufacturers specified that the plane is scheduled to make its maiden flight in 2023 and to enter service by 2027.  It is unclear if Russia’s Air Force intends to field large numbers of the plane, given that it is being marketed as an export product. Deputy Prime Minister Yuri Borisov said that current market demand for the new fighter is estimated at around 300 models, with the plane being primarily marketed to “Africa, India, and Vietnam.”