Russia's Military Has a Super Weapon: Meet the Father of All Bombs 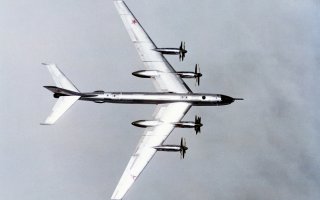 The Russian military operates one of the world’s largest and most diverse arsenals of thermobaric explosives—but just how much of a threat are these weapons, and how has the Kremlin used them in the past?

First, the basics. Thermobaric weapons are a type of explosive that consumes surrounding oxygen to create a high-temperature explosion within a wide blast radius. The blast wave generated by these explosives is longer and more intense than traditional bombs. Thermobaric weapons are widely considered to be among the most destructive non-nuclear explosives, and for good reason. The most common weapon of this type is the fuel-air explosive (FAE), a two-charge weapon that disperses and detonates a chemical cloud, creating a powerful blast wave that is particularly potent against fortified or otherwise enclosed positions like bunkers and foxholes.

Both the United States and the Soviet Union dabbled in thermobaric weapons from the 1960s onward. The U.S. military notably procured a slew of FAE bombs from the BLU and CBU families, some of which were used during the Vietnam War. Meanwhile, the USSR and its Russian successor found a wide range of uses of thermobaric systems. One of the most prominent entries in Russia’s thermobaric roster is the TOS-1 multiple launch rocket system and its modernized TOS-1A/TOS-2 variants. With up to thirty missile tubes that can be salvo launched in around fifteen seconds, TOS-1 batteries can cause a staggering degree of destruction within a short time span. These weapons were first used in the latter years of the Soviet-Aghan War, though the full extent of their destructive potential was revealed during the Second Chechen War. Determined not to repeat the costly mistakes of the First Chechen War, Russian heavy artillery and rocket batteries, partly consisting of TOS-1 units and RPO-A Shmel rocket launchers with thermobaric warheads, leveled large swathes of the Chechen capital Grozny to pound the rebels into submission. More recently, international organizations have alleged that TOS-1M’s, presumably supplied by the Kremlin, were being operated by Russian-backed separatists in the Donbass region of eastern Ukraine.

Russia’s defense industry has developed thermobaric warheads for many of its rocket launchers and anti-tank guided missile systems, including the 9M123 Khrizantema, RPG-26, and 9M133 Kornet. These weapons have been employed in conflicts around the world, particularly over the course of Russia’s military intervention into the Syrian Civil War. One of Russia’s latest short-range ballistic missile systems, the Iskander-M, is compatible with thermobaric warheads. Several variants in the prolific KAB family of guided bombs come with thermobaric warheads, as does the S-8 rocket and several other types of Russian air-launched munitions.

By far the most famous and controversial thermobaric weapon is Russia’s Aviation Thermobaric Bomb of Increased Power, also known as the Father of All Bombs (FOAB). If Russia’s reported specifications are true, then the FOAB, which has a payload equivalent to forty-four tons of TNT and blast radius of roughly three hundred meters, would be the most powerful non-nuclear bomb in the world, with destructive potential close to that of a tactical nuke. The FOAB was tested in Syria for the time in 2017. Some military observers have cast doubt on the bomb’s capabilities and technical nature, which remain unconfirmed at this point.

Russia’s military has invested relentlessly into thermobaric weapons since the Soviet collapse, and there is no indication that this long-standing trend will change anytime soon. In addition to being thoroughly represented throughout Russia’s ground forces and air-launched arsenal, many of these systems have seen marked export success in past years.