Russia's Military Is Transforming (And Getting Stronger) Right Before Our Eyes 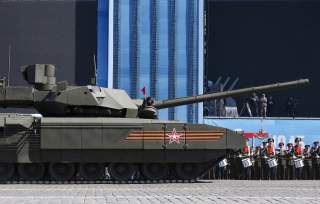 At a meeting of the military-industrial commission in Moscow in September 2017, Russian President Vladimir Putin had instructed the Ministry of Defense to organize work on the creation of the Military Innovative Technopolis ERA (MIT ERA).

In an age of cyber security and artificial intelligence, it is only fair to assume that the technological sophistication of warfare has been upgraded as well. Russia has made headlines for orchestrating an international campaign of information warfare, courtesy of allegations of election interference in the 2016 U.S presidential elections.

For the last few years, Russia has been focusing a great deal on developing its military technology. In an age of technological supremacy, the decisionmaking risk calculus has escalated, and Russia’s maritime strategy is now focused on a new doctrine of sophisticated military capabilities.

As Russia expands its geopolitical sphere of influence, there is no doubt that the Pentagon, the State Department and the White House are keeping a close eye on Russia’s military innovations.

For one, some Russian analysts like it to a startup analogy, where Russia is a venture capitalist and is ready to pour in money into the newest technology on the block. The military infrastructure in Moscow is clearly championing breakthroughs in military technology through start-up style disruption.

The Russian military with firm Russian characteristics, that is fear of Western domination, epitomizes institutional flexibility. Valery Gerasimov, the Chief of General Staff of the Russian armed forces has made military innovation his priority.

American analysts describe the Russian Foundation for Advanced Research Projects as the Russian DARPA. The foundation has been tasked with leveraging cutting-edge AI developments to ensure Russian superiority in defense technology.

Russia has epitomized scientific innovations in the space-tech era. It’s been six decades since Russian cosmonaut Yuri Gagarin went into space. Ironically, Russia’s constructive scientific policy is what began the space race with its American counterparts and thus ensued the longest geopolitical standoff in the Cold War.

The Kremlin knows only too well that the contours of future wars will be shaped by conflicts such as Syria, where there will be less “boots on the ground” (to quote an Obama-era phrase) and more combat through aerial weaponry by virtue of drone strikes.

The Russian military is looking at technological breakthroughs with the adoption of advanced and complex robotics. There are constant developments made in the Unmanned Aerial Vehicle (UAV) weaponries as Moscow looks to expand on the size of its UAV fleet. Russia has leveraged its relationship with Israel (another leader in high-tech innovation) as it procured UAVs from Tel Aviv.

Russia is currently playing a catch-up game but catching up it is. Moscow has 4,000 UAVs, which makes it the second-largest fleet after the United States and ahead of China in this regard. This adds to Moscow’s intelligence surveillance reconnaissance (ISR) capabilities.

In the past, Russians have lacked combat UAVs as Moscow has found itself lacking in combat warfare. Russia’s purchase from Israel was contingent on Moscow not trying to reinvent the wheel by reverse-engineering the ISR. However, Washington alludes that this is exactly what Moscow is doing with the ORION UAV.

Slowly but surely the military-industrial complex in Russia is pivoting. This has caused a lot of panic in the West given the fraught relationship between Moscow and Kiev and Russia’s intrusive policies into Ukraine’s internal affairs, especially given that Ukraine is in the midst of an election season.

Not too long ago, up until 2016, it was the United States that had a monopoly on the most advanced military technologies. The Americans would focus on logistics and the goal was to develop systems that would help their soldiers first.

Russia’s sophistication in military AI is characterized by fast, efficient machines that can handle data, break down the complex information within split seconds, and relay it to the soldiers handling it.

Moscow is prepared to adopt a strategy of throwing everything on the floor and to see what sticks. In this sense, the Russians are keen on experimenting and finding the most cost-effective solutions. The Russians are building a suite of systems—from tiny drones to large vehicles that can be submerged on time.

Soviet-era communism may have disappeared but its genes of prowess in science and technology have not. Moscow is constantly organizing AI-related conferences, workshops and seminars and trying to leverage AI innovation towards its defense priorities.

The Ministry of Defense (MOD) has a lot of funding allocated to this field and is very focused on having robotic systems in AI. For Putin, it is more personal, and the Kremlin is trying to beat the West by using their own innovations in AI and parlaying them into military innovations.

Former U.S ambassador to Russia Michael McFaul characterized the current phase of U.S-Russia relations as not “cold war but hot peace.” The Cold War did see the beginning of the arms race, and while this isn’t exactly the Cold War, it’s safe to say that this is an “arms race” of a different sort.