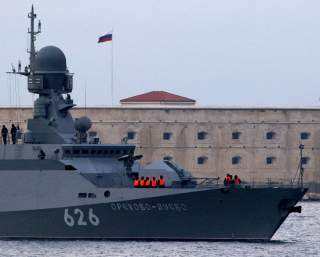 Baltic defense coverage tends to favor aerial interceptions, and for good reason; these are direct, heavily publicized confrontations with an ever-present risk of escalating into open conflict. But, conspicuous as they are, interceptions barely scratch the surface of the issue at hand. The bigger story of Baltic security spiral is the creeping, decades-long Russia-NATO military buildup that will only intensify in the absence of comprehensive deconfliction talks.

The Northern Fleet continues to serve as Russia’s largest naval force, but the past decade has seen the drastic expansion and modernization of the Baltic fleet. Some of the Baltic fleet newest additions were prominently featured earlier this month, during a series of major combat exercises held at the “Khmelevka” training grounds located in Russia’s Kaliningrad region.

The Steregushchiy class is not only a much-needed successor to the older Soviet Grisha line of corvettes, but an early showcase for Paket-E/NK-- the latest in Russian naval weapons technology. The Paket platform consists of an integrated central control system, a “hydroacoustic station” for sonar target detection, and a launcher equipped with anti-submarine MTT torpedoes as well as heat-seeking M-15 anti-torpedoes. As a system that merges defensive and offensive capabilities within the same command and control structure, Paket is currently without direct parallels.

The next day, TASS reported a second major drill consisting of the Baltic Fleet’s naval aviation staples: "Su-30SM multirole fighters, Su-24M frontline bombers and Mi-24 attack helicopters performed combat assignments at the naval ranges of the Baltic Fleet to breach the air defenses of the group of the notional enemy’s warships and deliver a missile and bomb strike,” the Baltic Fleet statement read. According to onsite “data recording equipment,” the naval targets-- whose role was played by the aforementioned four corvettes-- were neutralized with Good Effect On Target (GEOT).

The Su-30SM is the newest fighter to join the Baltic Fleet’s naval aviation roster, which otherwise consists of over a dozen Su-27 and Su-24 aircraft each. A modernized, thrust-vectoring variant of the Su-30 multirole fighter, the Su-30SM seems to occupy an air-to-ground attack role in the Baltic Fleet. Interception and escort roles will continue to be filled by the Su-27 for the foreseeable future, cheap and effective as it is to deploy for these types of low-intensity engagements.

Even more striking than their considerable scale is the timing of Baltic Fleet drills. They are quite consciously being held one month prior to a massive, British-led NATO exercise in the Baltic sea, again highlighting the escalatory character of Baltic military competition.

The Baltic Fleet is not, and will likely never be, Russia’s largest. It is, however, increasingly the recipient of the latest Russian surface ships and weapons technology in what appears to be a quality-over-quantity modernization strategy.