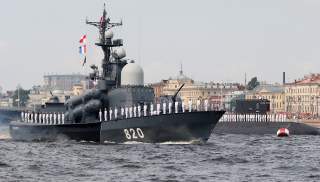 The Russian navy’s transformation is accelerating.

More large ships are decommissioning and smaller vessels are taking their place, reshaping what was once a major global force into a new kind of regional fleet.

But that doesn’t mean the Russian navy won’t still be a threat to Western interests. What the Kremlin once achieved with huge, oceangoing battlecruisers, it now aims to achieve with lightweight corvettes armed with sophisticated, long-range missiles.

To that end, in April 2019 the Kremlin decided to dismantle rather than revamp two Cold War-vintage Kirov-class battlecruisers. Moscow likewise is considering scrapping its sole aircraft carrier Admiral Kuznetsov rather than pay for maintenance and upgrades.

The accidental sinking of the PD-50 drydock in October 2018 could weigh on the decision. PD-50 was the only drydock in northern Russia that could accommodate Kuznetsov.

The fleet’s transformation has been controversial in Russia. Paul Goble at the Jamestown Foundation in late April 2019 summarized the debate. “Capt. Konstantin Sivkov, the president of the Academy of Geopolitical Issues and a frequent critic of the government, for example, has argued that the Russian military maritime fleet today is in a horrific condition,” Goble wrote.

Older ships are being taken out of service before new ones are ready; and as a result, “the [surface] vessels that are really able to go to sea can be counted on one’s fingers.” That number, in actuality, has shrunk to three—and none of them are an aircraft carrier. “As for submarines, everything is classified,” the military expert said, adding that he “does not think the situation with regard to them is significantly better than with surface vessels.”

Many that should be on station are kept for unconscionably long periods in drydocks for refitting. Sivkov blamed the Kremlin for this situation, arguing that the Russian authorities are simply not providing the fleet with enough money.

The Kremlin, for its part, is doing what it can to suggest otherwise via an intense propaganda campaign. Pres. Vladimir Putin [in mid-April 2019] attended a ceremony at a shipyard that is building what will be the world’s largest nuclear submarine. And officials have been playing up what they say is a signal Russian success in launching the first-ever floating nuclear power plant for the Arctic.

But the submarine will not be ready for at least another year and probably two or more; whereas the atomic power plant ship is designed to support coastal development along the Northern Sea Route rather than about strengthening naval capacity.

Some Russian observers blame internal politicking at the Kremlin for sapping the navy’s resources, Goble wrote. “Pro-navy commentators have stepped up their complaint about the command structure in the Russian military, which leaves the navy under the thumb of the army and makes it impossible to perform its mission.”

According to Topwar.ru’s Aleksandr Timokhin, there is no single naval command; and consequently, the VMF cannot develop in the way it should to support a broader military effort. Generals do not understand that ships are not regiments and cannot be managed the same way, he says.

But that is not the only problem the Russian navy faces, Timokhin continues. “It is a lie” that there has not been enough money for the fleet. Rather some of it has been drained off by corruption and much of the rest lost because of the absence of a strategic plan and structures capable of adhering to one, rigid plan. He also blames sanctions and unnamed “foreign agents” for undercutting the Russian fleet.

Regardless of the cause, the result for the Russian navy is fewer new ships. And the ships it is acquiring generally are missile corvettes displacing no more than 5,000 tons of water. An American destroyer, by contrast, displaces 9,000 tons.

The Kremlin bought just four new warships in 2018, all corvettes. While small, these vessels pack serious firepower. In recent years, corvettes from the Caspian Sea fleet have fired long-range Kalibr cruise missiles at targets in Syria -- all without ever leaving Russian waters.

But the numbers are telling. The Russian navy by all metrics is falling behind the U.S. and Chinese navies. In 2019 the Russian fleet has 360 ships, according to U.S. Navy commander Keith Patton, writing for the Center for International Maritime Security. The Chinese fleet, by contrast, possesses 624 warships.