Russia's Navy Is Powerful, But It Won't Be Physically Storming Enemy Beaches Any Time Soon 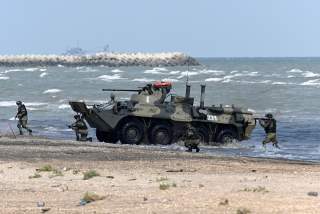 As Russia flexes its muscles in overseas conflicts like Syria, the Russian Navy is changing its amphibious doctrine to emphasize long-range operations.

Russia is moving away from World War II-style storm-the-beach assaults to modern amphibious landings where the big transports remain beyond the horizon as they dispatch troops by landing craft and helicopter.

“The large amphibious warfare ships currently in service with the Russian Federation Navy, whose architecture hearkens back to the tank carriers of World War II, primarily envisage amphibious landings directly onto the shore using ramps,” according to an article written by Russian analyst Ilya Kramnik in Izvestia. “In rare cases, amphibious landings used floating armor in direct proximity to the shoreline,” while support ships provided close-range firepower to subdue coastal defenses.

But a Normandy-style landing today would leave amphibious craft as sitting ducks for long-range enemy weapons. One reason America is beginning to embrace over-the-horizon operations is the proliferation of anti-access/area denial weapons, such as missiles, mines, and drones, designed to keep the U.S. ships from approaching hostile shores.

So just like America, Russia is switching to over-the-horizon landings. “Naval infantry lands by sea (using...landing cutters carried in the well deck of a landing helicopter dock or amphibious assault ship) or by helicopter,” says the Izvestia article, which was translated by the U.S. Army’s Foreign Military Studies Office (FMSO). “Shallow-draft cutters, air cushion vehicles and helicopters sharply increase the number of areas accessible to an amphibious assault compared to the classic ramp-based; large amphibious warfare ships, which require a relatively level beach and a level seabed by the shore.”

Kramnik says the new Russian doctrine will speed up amphibious landings: substantial forces can be ashore within half an hour of the amphibious assault ships taking up their positions over the horizon. FMSO says “the Russian Navy has worn out its large amphibious warfare ships in supporting the Syrian government. They have been pulled out of the ﬂeets, used continuously and then quickly refitted and returned to the ﬂeets.”

Either way, Russia is stuck for now with aging amphibious ships designed for a different era. “The Russian Navy currently has 15 Project 775 large amphibious warfare ships—which were built in Poland...during the mid-seventies and the early nineties—and four Project 1171 ships built in the USSR in the sixties,” Kramnik writes. “Within the framework of possible local conﬂicts close to Russian borders, there could be a continuing need for such vessels. However, carrying out long-distance missions from our own shores requires entirely different ships able to not only deliver … men and materiel to a requisite spot, but also to ensure long-term support, including with air support…”

Interestingly, Kramnik argues that “this kind of amphibious assault grouping will require for its own support a corresponding number of long range maritime and oceangoing warships, whose series production for the Russian Navy is proceeding with great difficulty.”

In other words, new amphibious ships essentially require a new Russian Navy, which would be good news for Russian shipbuilders and for the navy to get a larger share of the budgetary pie.