Russia's New, Bizzare B-2 Look-alike Stealth Drone Is up to Something 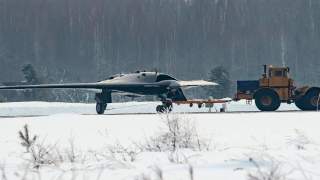 The Hunter-B drone will be fully autonomous and follow a pre-programmed flight path, according to Russian news agency TASS.

“The Russian defense establishment is promising a test that will include a short-duration 'jump'—the [unmanned combat air vehicle] will rise ever so briefly above the tarmac to test its launching and landing capabilities," said Samuel Bendett, an independent expert on the Russian military.

“The flight will not last for long — several dozens of minutes at the maximum," a source told TASS. “Teams on the ground will intervene if necessary.”

Hunter-B’s much-anticipated first flight could signal the beginning of a long development that could end with the Russian air force operating fighter-style stealth drones.

A flying wing similar in shape to the U.S. Air Force's B-2 stealth bomber, Hunter-B in theory could penetrate enemy defenses to deliver ordnance.

It’s unclear how many Hunter-B prototypes exist. At least one was on the flight line when Russian president Vladimir Putin on May 14, 2019 visited the 929th Chkalov State Flight-Test Center in Russia's Astrakhan region.

Commercial satellite imagery confirmed the Hunter-B drone’s presence at Chkalov alongside various other warplane types, including the Yak-130 trainer and several version of the Su-30 multi-role fighter.

It was the unmanned aerial vehicle’s first appearance since January 2019, when photos began circulating depicting the large, flying-wing UAV on the ground at an airfield in Novosibirsk.

“In addition to the modern and advanced military aircraft and helicopters that were shown to us, unmanned aerial vehicles were presented,” Putin said in a prepared statement following the Chkalov visit. “I emphasize that all the activities in preparation for the serial production of this technology were performed on time.”

The War Zone journalist Joe Trevithick for one questioned whether Hunter-B is very stealthy. “The most glaring issue is the crude engine installation, which also does not seem to include any provisions for a stealthier arrangement in the future,” Trevithick wrote.

“The exhausts are a notoriously complex component of any stealth flying wing aircraft. The entire engine arrangement, including both the inlet and exhaust, also appears to be relatively in-line, another feature that would hurt the aircraft's low-observable characteristics.”

"At this point, it is going to be heaviest and fastest UAV [in Russian service] if and when fielded, but additional testing and evaluation will have to take place in order for this unmanned system to be fully functional,” Bendett said. “Its speed [up to 620 miles per hour] and weight — up to 20 tons — means that a host of aerodynamic, electronic and high-tech issues need to be worked out."

To be effective in service, Hunter-B also will need small precision-guided munitions, Tom Cooper, an independent expert on Russian military aviation, told The National Interest. The Kremlin long has lagged behind the rest of the word in PGM development.

"The Russian military is running multiple UAV-related projects," Cooper added. "Thus the emergence of this project is perfectly normal."