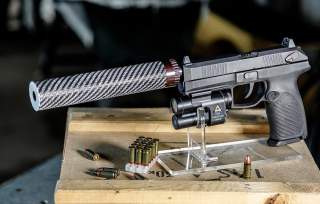 Having successfully completed its trial run in the Russian military, Russia’s new flagship pistol-- and one of this year’s most anticipated Russian firearms-- will soon be making its way to military and civilian markets.

Initial reports of a new Russian military pistol named Udav, or “Boa Constrictor,” emerged in the summer of 2018 alongside several photos of prototypes. Early speculation framed the Udav as a successor to the SR-1 Gyurza pistol, but it quickly became apparent that Rostec’s TSNIITOCHMASH harbors far greater ambitions for its new pistol.

Udav is a semi-automatic, 9mm caliber pistol designed around an emphasis on modularity. There will be three variants: general-purpose military usage, special operations, and civilian usage. Rostec claims that the latter version, which is currently undergoing certification as a global export product, “will be adjusted to the requirements of professional athletes. Its parameters will be competitive to those of such renowned firearms brands as Colt, Walther, Heckler&Koch, Glock, Browning, CZ and others.”

The upcoming pistol was widely believed to be exclusively chambered in the 9x21 round-- an armor-piercing caliber that is popular among Russian law enforcement-- but recent reporting suggests that Udav will also accept the 9x19 Luger round. To the extent that Rostec is serious about challenging giants such as Glock and Walther for so much as a fraction of the Western market, 9mm NATO compatibility seems like a non-negotiable feature for the civilian version of Udav. To be sure, it would not be unprecedented to release a different-caliber version of Udav for non-Russian markets: the AK-308, an AK-12 variant chambered in 7.62x51mm NATO, is the starkest illustration of the Russian defense sector’s newfound flexibility in tailoring their products to the caliber needs of foreign markets.

Udav’s key distinguishing feature lies in ammunition versatility; the pistol’s 18-round magazine is capable of firing armor-piercing, hollow point, and tracer rounds. TASS state news agency reports that Udav will also accept “two special cartridges of sub-sonic and enhanced penetrability,” the specifications of which remain undisclosed at this time. Also unknown is how, or if, this cornucopia of ammunition types will affect Udav’s reported maximum effective range of up to 100 meters.

The handgun is sourced entirely from Russian-made components (a salient criterion in post-sanctions Russia), and meets the durability specifications typically expected of a flagship, military-grade product: "Modern composite materials guarantee the weapon’s stable performance at air temperatures ranging from 50 degrees below freezing to 70 degrees above zero Celsius. It is equally convenient for left-handed and right-handed users. The design allows the shooter to actually see and feel the presence of cartridge in the chamber," according to Rostec’s industrial director Sergei Abramov

Udav is frequently styled as the vaunted successor to finally replace the aging Makarov PM, but the manufacturer has gone out of their way to stress that this is not the case: "Udav and PM are different. They are meant for coping with different tasks. PM is a peacetime weapon for police patrolling the streets. Udav is a powerful combat gun with far greater firepower," TsNIITochMash CEO Albert Bakov told Russian news outlet Izvestia earlier this year.

It seems unlikely that the Russian Defense Ministry will be replacing every Makarov with an Udav anytime soon, given the costs and logistical headaches involved in such an undertaking. Nevertheless, Udav is set to fill a previously neglected niche for Russian military and law enforcement operators who require a more powerful, longer-shooting sidearm than the venerable Makarov.