Russia's New 'Checkmate' Stealth Fighter: Here Is What We Know 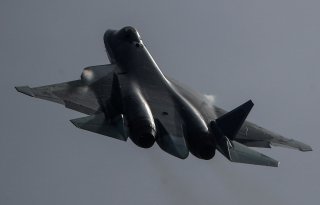 Earlier this month, Rostec released a brief video teasing Russia’s latest jet fighter. Though the clip did not reveal anything about the aircraft’s capabilities and configuration, the footage suggested that the fighter is being branded primarily as an export product. The full extent of Rostec’s export plans remains unknown but the video appeared to imply that India, Vietnam, Argentina, and the United Arab Emirates are being targeted as prospect clients for the upcoming aircraft. Yesterday, Rostec published an extended version of the same video clip. The newly released version featured several close-up shots of the new fighter, including its silhouette over the water. Additionally, it took a quick look at the control panels and avionics, afterburner footage, and, finally, a distant and somewhat hazy frontal shot.

The plane is manufactured by Sukhoi—a Rostec subsidiary—and is reportedly being referred to as “Checkmate,” though this could be an internal project designation rather than an official name. The promotional footage for the fighter is laden with chess imagery, focused around the black knight piece that’s prominently displayed on Rostec’s splash page promoting the product. Stills recently emerged from the Zhukovsky show site, purporting to show the new fighter in greater detail. As of the time of writing, it is unclear if the aircraft shown in these stills is a prototype or a mock-up of the finished serial product. The pictured fighter’s bort number has led to speculation that the upcoming plane will be called the “Su-75,” but this, too, remains unconfirmed. The plane boasts digitized gray camouflage reminiscent of the Su-57 fifth-generation fighter jet. Still, it is too early to conclude that there is any significant degree of design or capabilities overlapping between the two fighter jets. The Aviation Geek Club contributor Tom Cooper noted that the fighter shown in the stills is “a sort of a scaled-down mix of Northrop’s YF-23 (fin area; the Russians are known to have loved that solution a lot, already back in the 1990s) and Boeing’s X-32.”

It is widely believed that the new aircraft is a single-engine, single-seat canted tail fighter that is meant to serve as a cost-effective and export-oriented lightweight stealth fighter. Whereas the Su-57 is a next-generation air superiority platform in the same performance vein as Lockheed’s F-22 Raptor, “Checkmate” is apparently Russia’s answer to the F-35 Lightning II aircraft. “The teasers in English and the regions that the pilots presented in a video released by Rostec [state tech corporation] suggest that the domestic light fighter will be in competition with the US F-35 aircraft on foreign markets,” Executive Director of Aviaport Aviation News Agency Oleg Panteleyev told TASS.

In any case, the world does not have to wait much longer for the full reveal. Rostec’s upcoming aircraft is set to be introduced on the first day of the MAKS-2021 air show, which will run from July 20 to 25.

Mark Episkopos is a national security reporter for the National  Interest.

Image: Reuters. The image is of Russia's Su-57 stealth fighter.