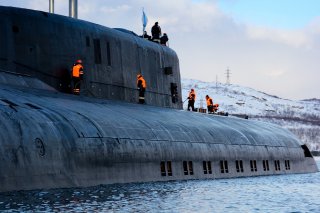 The United States Navy may have a new worry in Asia--this time thanks to Putin's Russia.

In addition to multiple Chinese aircraft carriers that will be operating in the Indo-Pacific, the Russian Navy will soon be deploying a nuclear-powered submarine armed with the ominously named Poseidon nuclear drones in the Pacific.

The Belgorod special-purpose nuclear submarine, which was developed as part of Project 09852, will be deployed to the Pacific Ocean after it completes state trails and commissioning, Russian state media reported.

"According to preliminary information, the Belgorod submarine will serve in the Pacific Ocean after commissioning," a source close to the Russian Ministry of Defense told Tass this week. "However, it would be able to perform missions in any location of the World Ocean."

The submarine is set to enter state trials this coming May, and under the current armament program, three of the special-purpose boats are scheduled to be completed by 2027.

In addition to carrying the six Poseidon unmanned underwater vehicles (UUVs), the submarine will reportedly be equipped with the AS-15 deep-sea nuclear station.

The precise operational characteristics of the Belgorod are classified, but it is believed to be based on a modified Oscar II class submarines, roughly ten meters longer than the Typhoon-class submarines but possibly narrower. The vessel was laid down in 1992 as a giant Oscar II-class nuclear submarine; the same class as the doomed sub Kursk. Construction stopped in 1997 due to lack of funds, but work restarted in the 2010s as Project 09852.

While there have been no official comments from Sevmash, the builders of the submarine, the news that the Belgorod would be deployed to the Pacific isn't actually a surprise. Moscow has made the modernization and upgrading of the Pacific Fleet a priority in recent years.

The first of the Project 09852 Poseidon submarines, designed specifically to carry the nuclear underwater drone, was launched in April 2019, and was scheduled for commissioning last year. However, it was delayed due to the novel coronavirus pandemic.

During the March 2018 State-of-the-Nation address to both houses of the Russian parliament, Russian President Vladimir Putin made public the efforts to develop the nuclear-powered unmanned underwater vehicle, which can carry both conventional and nuclear warheads. It is capable of destroying enemy infrastructure including port facilities as well as aircraft carrier strike groups (CSGs) and other targets.

Reports have suggested the Poseidon drone has intercontinental range capability and an operational depth in excess of one kilometer. The autonomous nuclear torpedo is capable of carrying a nuclear warhead with a yield of up to two megatonnes, which would be great enough to destroy an adversary's naval base.

A second Russian Navy submarine to serve as a basic carrier of the Poseidon nuclear-capable underwater drone is scheduled to be floated out in late June. As with the Belgorod, the Khabarovsk will reportedly be able to carry up to six Poseidon UUVs.