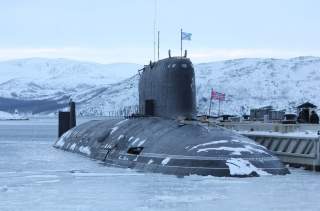 Key point: Russia is rushing ahead with hypersonic missiles and delivery via submarine would be a real threat.

Russia’s attack submarine fleet is one of the best in the world. When the Akula and Alfa classes of Soviet nuclear attack submarines (SSNs) were launched, they were among the most advanced in the world. While the Russian Navy has continued this tradition with the Yasen-class submarines—which are still under construction—it is also looking to the future with the new Husky-class. Information on the Husky-class is limited because the project is still on the drawing board, but it will have a number of interesting features that could make it harder to detect and more lethal. According to Vice Admiral Viktor Bursuk, the Husky-class will begin construction sometime around 2023. Finalization of the design and research work for this class is expected to finish by the end of 2018.

The Husky­-class is meant to serve in both the SSN (attack) and SSGN (cruise missile carrier) capacities. This was first reported in 2015, when the head of the United Shipbuilding Corporation, Anatoly Shlemov, revealed that the fifth-generation (referring to Husky) project would fulfill both of these roles. The importance of Russian SSGN platforms has been emphasized by certain groups in the Russian government, due to the use of Kalibr cruise missiles in Syria by the Russian Navy.

The primary improvement Husky class’ lethality is the new missile it is slated to carry—the 3M22 Zircon hypersonic cruise missile. The Zircon was successfully tested in 2017, reaching speeds of up to Mach 8. These speeds will make it very hard to track and intercept, as a cruise missile would be able to travel from a ship’s radar horizon to the ship very quickly. Zircon’s ability to reach Mach 8 puts it at almost three times faster than prior generation missiles. The P-800 Onyks or P-700 Granit missiles, for instance, could only reach speeds of Mach 2.5. The Husky class would also be capable of carrying Kalibr cruise missiles.

A recent photo released by the design bureau behind the Husky class, SB Malachit, may shed light on how these armament systems will be implemented into the submarine’s design. In the photo, launchers are seen in the bow and middle of the submarine. Eight covers are seen opening in the middle of the submarine. As Mr. Valagin writes at rg.ru, there will be between 40–48 missiles underneath these covers, as a similar launcher construction on the Yasen­-class submarines holds between 4–5 missiles, depending on the type.

The Husky-class submarine might seem redundant since the Yasen class is also in production. However, the addition of hypersonic weapons, increased automation and robotic integration, and reduced acoustic signature (especially if it really is two times) make the Husky class an incremental upgrade. Perhaps the true advantage of the ­Husky class is not in its technical specifications but rather its price—it’s slated to be a fair bit cheaper than the Yasen class. Moscow will appreciate the lower price, since the Husky class is expected to replace all third-generation SSNs in Russian service, including the Akula- and Sierra-class SSNs. Whether any of this gets past the planning stage remains to be seen.

Charlie Gao studied political and computer science at Grinnell College and is a frequent commentator on defense and national-security issues. This first appeared earlier in 2018.