Russia's Next Weapon: A Church 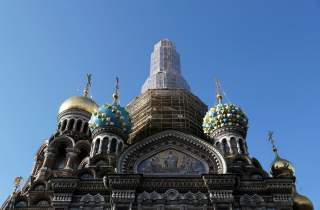 The Russian military plans to build a military church to bolster the spiritual values of its armed forces. Construction will soon begin of the Main Church of the Armed Forces, to be erected in Patriot Park outside Moscow, according to Colonel General Andrei Kartapolov, deputy defense minister and chief of the armed forces’ Main Military-Political Directorate, a new organization responsible for political education of the troops.

The “new church will be one more example of the people’s unity around the idea of patriotism, love, and devotion to our Motherland,” Kartapolov told Russian journalists.

To say the church, dubbed by some as the “Khaki Temple,” will have a martial air would be an understatement. “The walls of the military church are really made in the color of the standard Russian missile system and armored vehicle,” according to the Russian newspaper The Independent [Google English translation here] “...From the inside, the walls are decorated with paintings with battle scenes from military history and texts from the Holy Scriptures. The projected height is 95 meters [104 feet] and is designed for 6,000 people.”

“Kartapolov is convinced that the modern Russian serviceman cannot be shaped without shaping lofty spirituality in him,” Russian media said. “Speaking about ideology, the deputy head of the military department pointed out that this will be based on knowledge of the history of our Motherland and people and on historical and cultural traditions.”

“Even though the Russian constitution states that ‘no ideology may be established as state or obligatory,’ the Kremlin continues to search for a unifying set of beliefs,” notes the U.S. Army's Foreign Military Studies Office.

Religion has long played a role in Russian military life, first through the Russian Orthodox Church in Tsarist times, and then—in a secular way—through Communism in Soviet times. “In late imperial Russia, when they began to build garrisons, every regiment sought to build a regimental church, but not a synagogue or mosque,” Roger Reese, an historian at Texas A&M University who has written books on the Tsarist and Soviet armed forces, told the National Interest. “In Putin’s Russia, the Orthodox Church seeks every opportunity to represent itself as the national religion and tie itself to the state as it had under the tsars, so this act represents continuity broken temporarily by the Soviet years. Of course the Soviet regime did not build churches for the army, but it did build the ‘House of the Red Army,’ shaped like a star, in Moscow dedicated to the use of the Red Army and its soldiers. In some respects it was analogous to a USO [United Service Organization that supports American soldiers] building. So Putin’s dedicating one particular building to the use of the Russian Army soldiers for purposes of morale—and morals—is in line with that.”

While the thought of a military church will be distasteful to some, Russia is hardly unique in linking the military and religion. Many armies, the United States and Israel included, maintain chaplains who wear uniform and hold military rank. Chapels are common on military bases, and soldiers are given time for— and sometimes pressured to—attend religious services. While a Russian military church is likely to favor a specific denomination—Russian Orthodoxy—even that isn't unique: non-Christian members of the U.S. military have complained of religious discrimination, especially by Christian fundamentalists.

What's interesting is how little things change. Be it the Tsar's conscripts, or the Red Army's draftees or the volunteers who comprise much of modern Russia's military, some spiritual reinforcement is deemed necessary to get soldiers to fight.