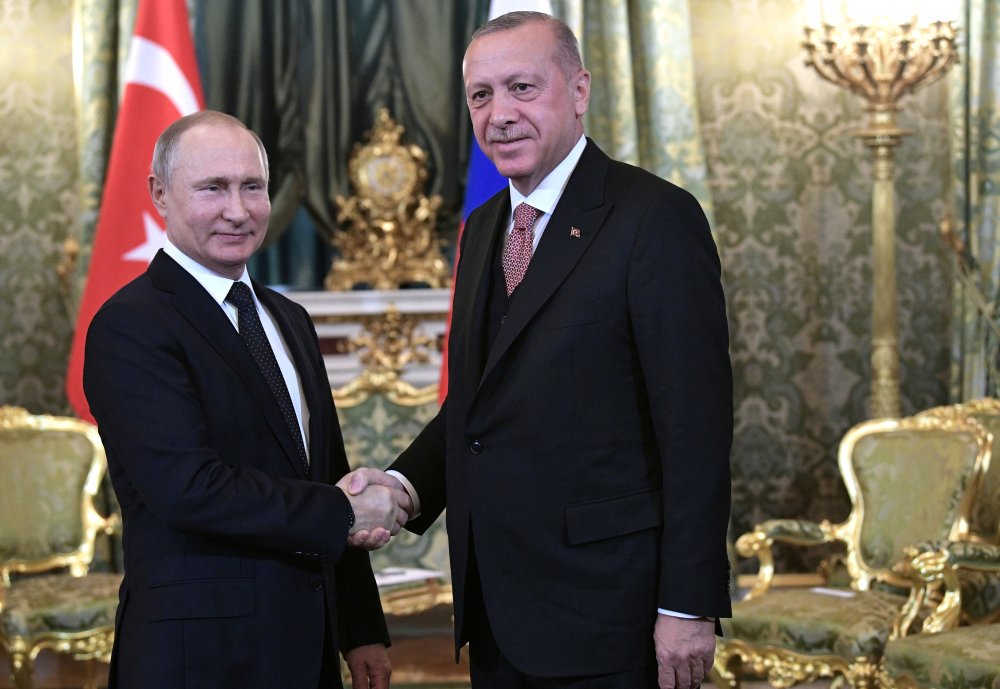 Russia and Turkey are “jointly working on creating promising aircraft and helicopters,” the press office of Russian state arms seller Rosoboronexport said Monday. It comes as Turkey continues to say it will take delivery of the Russian S-400 air-defense system, which has put the United States and Turkey on a collision course that could harm the historic alliance of Ankara and Washington. Turkey’s President Recep Tayyip Erdogan, who recently spoke to President Donald Trump, has offered to create a working group to discuss the S-400 crisis, according to a statement by the Turkish Presidency. Turkey is seen as a potential winner in all this, by exercising an independent foreign policy it can get the United States and Russia to compete for its affections, which will potentially allow Ankara to drive a hard bargain for what it wants in Syria or in energy deals.

It is not widely understood that while Russia seemed to have outplayed the United States in the S-400 deal, that Russia may now be tied to Turkey in a way that reduces Moscow’s area of maneuver. An article at Russia’s TASS state news agency in late April said Turkey will continue to procure the S-400 and also America’s Patriot surface-to-air missile system. Secretary of State Mike Pompeo has warned that Turkey might lose out on its role in the F-35 program if it takes the S-400. So Turkey’s foreign minister says that Ankara could approach another country to get new warplanes. Which country? Moscow.

This makes it appear as if Russia and Turkey will become deeply entwined military allies. Turkey might risk its role in NATO. The news about joint development of helicopters and aircraft comes in this context. For Russia, this could be a major inroad into a NATO ally, potentially doing to the United States and Europe what Russia thinks the West did to Russia in the Caucuses, Ukraine and Baltic states.

However, successfully creating an inroad will not be so simple. Turkey and Russia used to be on opposite sides of the Syrian civil war. Turkey was the main backer of the Syrian opposition rebels and Russia was the Syrian regime’s central ally. In fact, a Turkey even shot down a Russian plane in November 2015. Then, in December 2016, Russia’s ambassador to Turkey was assassinated by an off-duty Turkish police officer. But Turkey and Russia were already in talks for the S-400 by late 2016. In September 2017 Russia confirmed that Turkey had signed a contract for it. The air-defense system is now supposed to be delivered in two batches in June and July.

Turkey and Russia ended up as allies—as opposed to adversaries—through a long process that was accelerated by Turkey’s anger over America’s decision to work with the Syrian Democratic Forces against Islamic State in Syria. Turkey viewed the SDF as linked to the Kurdistan Workers Party (PKK). In 2015 a PKK ceasefire ended in Turkey and Ankara and the PKK engaged in a harsh conflict in 2015–2016, setting the stage for Turkey’s perspective that the SDF should not be allowed to gain too much power in Syria. Turkey has also launched airstrikes in northern Iraq against the PKK. The United States was disillusioned with Turkey’s policies in Syria and didn’t see how Turkey or the Syrian rebels would defeat the Islamic State, which the United States saw as a priority after 2014.

In August 2016 the SDF liberated Manbij from the Islamic State and Turkey was alarmed. It launched an operation into northern Syria called Euphrates Shield both to check the SDF advance and to aid the Syrian rebels. Meanwhile, Turkey and Russia began to work together on the TurkStream, a pipeline and energy initiative that will link Russia, Turkey and eastern Europe. Development began in October 2016, with a permit from Turkey, and a phase of the initiative was completed in November 2018.

There had also been a traumatic coup attempt in Turkey in July 2016 and Turkey’s president Recep Tayyip Erdogan was consolidating power in its wake, with tens of thousands detained and fired from civil service positions. An April 2017 constitutional referendum turned Turkey into a presidential system, making President Erdogan stronger.

Turkey, Russia and Iran also bonded over the Astana peace process, which began in earnest in January 2017. Initially the Astana discussions were merely designed to facilitate de-escalation in Syria, but soon after Turkey and Russia were working closely together. The Syrian civil war was outsourced to Turkey, Russia and Iran, weakening the regime’s role. Turkey and Russia also saw eye to eye on reducing the U.S. influence in eastern Syria. Russia wanted the United States to withdraw so the regime could go into eastern Syria. Russian rhetoric harshly condemned the United States for its role in Raqqa and in Tanf in southern Syria. Turkey wanted the United States out of Syria and praised President Donald Trump’s December 2018 decision to withdraw. But the United States didn’t withdraw. Instead, Washington threw Turkey a consolation prize of the $3.5 billion Patriot missile sale and placed a bounty on PKK leaders in late 2018.

Turkey had already decided where its policy was going in Syria. In January 2018 Ankara had made an agreement with Russia that enabled Turkey to go into Afrin unhindered by the Syrian air force. Turkey attacked the Kurdish People’s Protection Units (YPG) in Afrin in northwest Syria, accusing them of being PKK terrorists. Turkey then moved into Idlib, which is where it signed a September 2018 agreement with Russia that would prevent a Syrian regime offensive.

Turkey has not only grown closer to Russia, but also opposes U.S.-Iran sanctions. On April 29 Turkey and Iran announced political consultations in Ankara. Iranian Foreign Minister Javad Zarif made a positive trip to Turkey in mid-April also. This thwarts Washington’s policy of sanctioning Iran.

As Turkey and Russia grow closer, the Syrian regime is wondering if Turkish forces will ever leave northern Syria. Turkey now controls Afrin, the areas of Euphrates Shield around Jarabulus and Idlib. In Idlib the Syrian regime says there are thousands of extremists and terrorist groups. But Turkey wants more. It wants to go into Manbij and it wants a role in a safe zone all along the border, removing the U.S.-backed SDF from the border areas in eastern Syria. Ankara also wants Arab-Syrian refugees to go back to these areas under Turkish protection. A Turkish curriculum and other Turkish civil society initiatives are now influencing northern Syria. Damascus wonders how it will return these areas. It slammed the Turkish “occupation” in late April 2019.

Russia has been trying to reassure Syria’s regime. Russian foreign minister Sergey Lavrov said that Turkey’s role in Afrin, including building a new wall, was “temporary” in late April. Russia pays lip service to supporting its Syrian ally’s demands about pressuring Turkey to remove extremists from Idlib, which Turkey was supposed to do under the September 2018 agreement with Russia.

The real elephant in the room is what happens if the S-400s arrive. Turkey will be trained to use them and they will become operational. That will give Turkey leverage over the Syrian regime’s air force operations in Syria. How can the Syrian regime ever confront Turkey or the rebel groups that Turkey backs without Turkey’s consent once Ankara has the S-400 which has a range of hundreds of kilometers. By selling Turkey its latest air-defense system Russia knows that Turkey can track Russian aircraft in Syria. Russia can only go forward with its decision to sell Turkey the system under the assumption that there can never be a clash with Turkey over northern Syria.

Once the deal goes through Turkey will not only have a sophisticated weapons system, but it will also leverage and a veto over operations in northern Syria. Instead of Ankara asking Moscow for permission as it did before Afrin, Ankara will be a stronger player. The S-400 deal is therefore a complex affair that benefits Turkey, but it also may mean that Russia is now so entwined with Turkey that Moscow will hold less cards in Syria. This implies that Turkey may be able to do whatever it wants to do with the large areas it runs in northern Syria, which means that the likelihood of a clash over Idlib will be reduced. The extremist groups in Idlib, such as Hayat Tahrir al-Sham (HTS), also know this and some of these groups have even harassed Russia’s Khmeimim air base in nearby Latakia. Russia has conducted airstrikes against HTS in Idlib in late 2018 and 2019. However, Russia and Turkey must tread carefully in Idlib, since they don’t want conflict with one another. HTS could exploit this. The S-400 will mean the major powers have to tread more carefully.