Russia's Rush To Develop Hypersonic Weapons Might End In Catastrophe 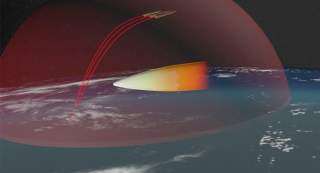 Key point: Russia wants to use nuclear weapons to make up for its conventional inferiority.

Russia has tested a new hypersonic missile that can penetrate any enemy defense, the Kremlin claimed.

On Dec. 26, 2018, Russian president Vladimir Putin announced that the Russian military had tested the Avangard hypersonic glide vehicle in order to "successfully verify all of its technical parameters," state-owned TASS news agency reported.

"On my instructions the industrial enterprises and the defense ministry have prepared for and carried out the final test of this system," Putin said, according to TASS. "The test was completely successful: all technical parameters were verified."

Anything faster than five times the speed of sound qualifies as "hypersonic."

Staying relatively close to Earth — around 300,000 feet up, approximately where the atmosphere ends and space begins — a hypersonic vehicle glides toward its target at many times the speed of sound, potentially performing small maneuvers en route.

The U.S. Army's Ground-Based Midcourse Defense missiles in Alaska and California represent America's main defense against nuclear-armed ballistic missiles. But the GMD rockets lack the speed, maneuverability and accuracy to hit an ICBM, which in its final phase of flight can reach a velocity 20 times the speed a sound.

Putin claimed Russian forces would deploy Avangard as early as 2019, potentially making Russia the first country to field, on an operational scale, a practical, non-nuclear hypersonic weapon. China and the United States continue to develop hypersonic weapons of their own, but so far have declined to issue the weapons to front-line forces.

In rushing to be first, Russia could end up fielding an unreliable weapon. In July 2018, Griffin asserted that the United States remained the world leader in hypersonic-weapons research. The Pentagon determined there was no need to hurry up and equip troops with an unrefined weapon.  "We didn’t see a need for it."

Griffin also cast doubt on the Kremlin's bold claims regarding its own super-fast weapons. "How close they are to operational, I just don’t know."